The series is levelled at 1-1 as both New Zealand and the West Indies have won a Test each.

WI 32/0 in 9 Overs
C Gayle 18(23), K Brathwaite 11(32)
West Indies finish the day’s play 261 runs adrift of New Zealand. Chris Gayle has looked menacing and is looking good for a big score on this Barbados wicket. New Zealand need to get early breakthroughs or risk losing the Test match by the end of the day’s play tomorrow.
New Zealand 293 Overs 78.2
M Craig 46 (93),
That’s curtains for New Zealand. Trent Boult becomes Sulieman Benn takes five and its his fourth of of his career. The New Zealand pacer goes for a wild heave and is caught out of his crease and Denesh Ramdin stumps him.
T Boult st Ramdin b Benn 12 (21)
New Zealand 278/9 Overs 74
M Craig 44 (85), T Boult 0 (3)
Thats Kemar Roach’s fourth wicket. This ball was a bad one down the leg side and Wagner nicks it to Ramdin, who takes a smart catch.
N Wagner c Ramdin b Roach 2(16)
New Zealand 258/8 Overs 66 Overs
What a waste of a wicket. While he was looking on course to score his third hundred, the batsmen try to take a needless cheeky single and Jimmy Neesham is short of his crease at the non strikers end. The end is near for New Zealand.
J Neesham Run Out 78 (91)
New Zealand 238/7 Overs 61
J Neesham 67 (80), M Craig 20 (45)
Yet again Mark Craig drops anchor and Jimmy Neesham is of course, looking good for a big score. His third Test century to be precise. There have been a couple of half chances but West Indies have not been able to latch on to it.
New Zealand 213/7 Overs 53
J Neesham 56 (64), M Craig 6 (13)
Jimmy Neesham reaches fifty! What a start to his career. In his typical style, the fifty has come of double quick time and is looking good for more. Can Mark Craig play yet another resilient knock?
New Zealand 194/7 Overs 49
J Neesham 43(50),
There goes Tim Southee! Sulieman Benn picks up his fourth wicket and is probably the best ball of the wicket-taking ones. A full length yorker, almost unplayable breaches Southee’s defense and is bowled.
T Southee b Benn 6(15)
New Zealand 172/6 Overs 43
J Neesham 27(31), T Southee 0(1)
Another wicket goes! Benn is on target yet again and there goes the fourth wicket of the session. This quicker one had bounce and takes BJ Watling edge and the big ban Gayle does well to take the catch from first slip, just a couple of inches off the ground.
BJ Watling c Gayle b Benn 1(14)
New Zealand 170/5 Overs 41
J Neesham 25(30), BJ Watling 1(4)
And New Zealand are five down now. They have got the big wicket of the Kiwi captain; Brendon McCullum. And once again, Sulieman Benn is the wicket-taker. McCullum was positive from the start, and was looking good.
But that has to be one of the most comical dismissals of the series. It rises sharply after bouncing, and McCullum tries to fetch it from outside off side and flick it towards leg, instead gets a top edge and the ball takes an age and a half to lnd safely in Darren Bravo’s hands at first slip.
OUT! B McCullum 31(30)
New Zealand 159/4 Overs 39
B McCullum 30(28), J Neesham 16(24)
Roach returned to haunt the Kiwis again as he claimed the wicket of Ross Taylor, while Sulieman Benn got rid of the dangerous Kane Williamson. West Indies on top at the moment.
New Zealand 95/2 Overs 26
K Williamson 22(43), R Taylor 24(28)
An unbeaten 67-run stand between Kane Williamson (40 not out) and Ross Taylor (34 not out) has put New Zealand back on track. The West Indies would be pleased with their effort but another wicket here in the first session might have done the trick for them. New Zealand would be hoping to build up on the stand that these two guys have provided them. Stay tuned for action post lunch.
New Zealand 67/2 Overs 19
K Williamson 22(43), R Taylor 24(28)
Kane Williamson and Ross Taylor have steadied New Zealand. The two batsmen have added 39 runs for the third wicket, which has put New Zealand back on track.
New Zealand 28/2 Overs 10
K Williamson 7(16)
Kemar Roach has struck again! Tom Latham squanders a confident start as he is out leg-before in the 10th over of the innings. Full marks to the West Indies pacer, who bowled a quick one that skidded in and trapped the batsman in front of the wickets. New Zealand in bit of bother here.
OUT! T Latham lbw b K Roach 14(32)
New Zealand 17/1 Overs 4
T Latham 10(13)
There’s the first wicket! West Indies pacer Kemar Roach pitches it up, inviting Hamish Rutherford forward. The batsman chips it to mid-on, where the veteran Shivnarine Chanderpaul takes an easy catch. West Indies draw the first blood.
OUT! H Rutherford c Chanderpaul b Roach 4(12)

New Zealand captain Brendon McCullum has won the toss and elected to bat against the West Indies in the third Test.

Hello and welcome to CricketCountry’s coverage of the first day’s play of the third and final Test match between the West Indies and New Zealand at Bridgetown, Barbados. This is Devarchit Varma, and I will be bringing you the momentary updates of the match. The series is levelled at 1-1 as both New Zealand and the West Indies have won a Test each. While the Kiwis started off the series with a thumping 186-run win over the hosts, the Caribbean side bounced back in the next Test, pumelling the tourists by a margin of 10 wickets. Ahead of the final Test, West Indies coach Ottis Gibson said, “Hopefully we ll get a very good surface, one that helps our quick bowlers a little bit more than maybe Trinidad and Jamaica. Our fast bowlers are bowling fantastically well so hopefully we get a pitch that gives them a little bit of support and they can continue to bowl the way they have been bowling and bowl us to a series win. Catch live scorecard and ball-by-ball commentary of the first day’s play here 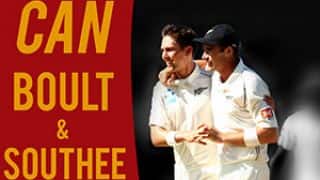 West Indies vs New Zealand 2014: Tim Southee and Trent Boult must step up and be counted