The West Indies will be resuming their first innings at 169 for two in reply to New Zealand's 293.

Hello and welcome to CricketCountry’s live blog of the third day’s play between the West Indies and New Zealand at Kensington Oval in Barbados on Saturday. The West Indies will be resuming their first innings at 169 for two in reply to New Zealand’s 293.

The hosts could add only 137 runs during the course of the second day as rain interrupted proceedings. Kraigg Brathwaite’s half-century was the bright spot for the Caribbean side as he helped them get of to a good start after the early dismissal of Gayle. The explosive left-handed batsman scored 42 runs.

According to AFP, When the weather closed in after 15 minutes’ play in the post-lunch session, Kirk Edwards (42 not out) and Darren Bravo (8 not out) were seeking to build on the promising position. More showers are forecast on the scheduled third day on Saturday, presenting a challenge to both sides to play the sort of positive, adventurous cricket in the time available over the remaining three days to force a result with the series now locked at 1-1. 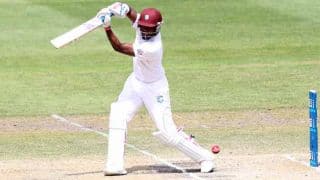