New Zealand have a lead of 100 runs in the second innings against the West Indies.

New Zealand will aim to extend their second innings lead when they resume at 123 for three on the fourth day of the third and final Test match against the West Indies in Barbados on Sunday. New Zealand have a lead of 100 runs in the second innings. Catch LIVE SCORECARD here.

Kane Williamson and Brendon McCullum lifted New Zealand to 123 for three, a lead of 99, at stumps on the third day of the third and final Test aagainst West Indies at Kensington Oval on Saturday. Early strikes by the West Indies bowlers put the tourists under pressure in their second innings but an unbroken fourth-wicket partnership of 55 between Wiliamson and McCullum steadied the ship, AFP reported.

Both batsmen had their moments of good fortune but Williamson’s unbeaten 58 and the captain’s 23 not out have given their team a fighting chance going into the fourth day on Sunday of posting a competitive target in this series decider. Trailing by 24 runs after the West Indies were dismissed for 317 in their first innings, the Black Caps’ top order wobbled against the threat posed by two home-grown fast bowlers.

Kemar Roach removed both opening batsmen to lift his career tally of Test wickets to 98. Tom Latham miscued an attempted pull to midwicket before he had scored and Hamish Rutherford’s poor run of form continued with an edge to wicketkeeper Denesh Ramdin when on 19. 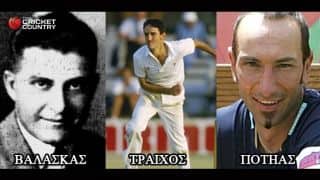 Greece and her three cricket connections