Catch the preview of the West Indies vs New Zealand 3rd Test here.

With their three-match Test series levelled 1-1 after hosts West Indies registered a thumping win in the second Test at Port-of-Spain, New Zealand have an uphill task in front of them as they aim for a series win in the Caribbean.

The third and final Test match of the series begins on Thursday at Bridgetown, Barbados. Given the form that they are in, the Brendon McCullum-led New Zealand would fancy their first away series win against a top side since 2002. The West Indies managed to bounce back well in the second Test, but their inconsistency is one of the major factors for their mixed performances, and New Zealand would be confident of a good show.

It was in 2002 when the Kiwis won their last overseas Test series, and that win was against the Caribbean side itself. They will aim to make amends and bounce back after the disappointing 10-wicket thrashing that they received last week. Kane Williamson, who was the star in the Kiwis’ win in the first Test with a superb hundred, would be determined to make a strong mark after he was reported for a suspect bowling action after the second Test.

New Zealand are better placed than the West Indians when it comes to the batting department, as they have the three highest run-getters of the series in their camp. Tom Latham (274), Kane Williamson (209) and BJ Watling (177) have scored the most runs in the series so far, and New Zealand would be pleased with the performance produced by some of their batsmen. However, the poor show by almost all their batsmen in the second Test — which resulted in a heavy defeat — will definitely be on the minds of the tourists.

On the other hand, the West Indies may not have found any batsman who has been among runs (barring veteran Shivnarine Chanderpaul with 155 in two Tests), their bowlers have come to the fore with impressive shows. Jerome Taylor with 10 wickets and comeback man Suleiman Benn with nine scalps have been the key bowlers for the West Indies.

Chris Gayle, the explosive opener, finally looked his usual self in the second innings of the last Test, and the West Indies would hope that the fiery left-handed batsman remains consistent with the bat in the final Test. Gayle smashed 80 not out in West Indies’ modest chase and that knock should give him some much-needed confidence, as he has struggled in the longest format of the game of late.

Kraigg Brathwaite and Darren Bravo scored tons for the West Indies in the last match, and they would be expected to carry on the good run.

The last time the Kiwis toured West Indies was in 2012, wherein they were blanked 2-0 in a two-match series. New Zealand have turned up determined and well-prepared this time, and it is the West Indies who have to rise up to the occasion and attain consistency. 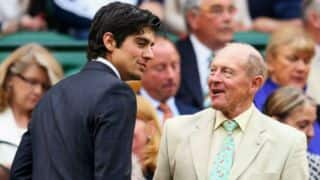