The PCB announced a list of 31 probables on Thursday for a week-long camp in Lahore and it did not include the name of Irfan, who has been a certain selection for the ODI and T20 sides, when fit.

Karachi: Mohammad Irfan was ignored for the national training camp ahead of ODI series in the West Indies since the tall left-arm pacer’s conduct at the Pakistan Super League (PSL) remains under suspicion. The PCB announced a list of 31 probables on Thursday for a week-long camp in Lahore and it did not include the name of Irfan, who has been a certain selection for the ODI and T20 sides, when fit. “The selectors did not get clearance from the Board to consider Irfan for the coming tour so they did not pick him,” a source close to the national selection committee told PTI. PCB officials have confirmed that Irfan was also approached by the same bookmaker during the recent PSL in Dubai who had established contacts with Pakistani batsmen, Sharjeel Khan and Khalid Latif. Full Cricket Scorecard: West Indies vs Pakistan, 1st T20I at Kensington Oval, Barbados

PSL Chairman Najam Sethi had said that Irfan had received some four to five offers from the bookmaker for spot-fixing but did not report it to the PCB s ACU.”The PCB allowed him to play in the PSL giving him the benefit of the doubt while sending Sharjeel and Khalid back last month as there was no evidence of Irfan having accepted any offer. But now that he is back in Lahore the ACU are investigating him closely which is why he has not been cleared for the West Indies tour,” a PCB insider said. PSL 2017 spot-fixing: Mohammad Irfan continues to be under investigation, claims PCB

Sharjeel and Khalid were both suspended under the PCB’s anti-corruption code and sent back from the PSL. They have denied any wrong doing and are now preparing to plead their innocence before a three-member tribunal appointed by the Board to probe the case. The two, however, have admitted breach of discipline by not reporting the offers from the bookmaker Yousuf to the PCB immediately. The insider said the Board did not want to take any chances with Irfan which is why they had asked the selectors to ignore him for the time being.

Irfan, 34, has played in four Tests but is a regular in the ODI and T20 sides with 83 ODI wickets in 60 matches and 15 in 20 T20 games. He was part of the Pakistan limited overs squad on the last tour to Australia. The other notable omission for the camp is wicketkeeper-batsman, Muhammad Rizwan who also went to New Zealand and Australia. 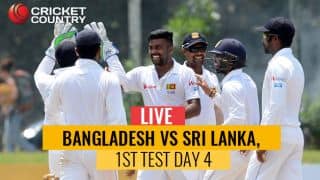