Kraigg Brathwaite scored a stroke-filled half-century before the cloudburst in Barbados.

West Indies was spearheaded by Kirk Edwards, who looked rock solid before heavy rain at Barbados provided an opportunity for visitors New Zealand to regroup and make a comeback into the Test match. The Windies dominated the morning session through their openers, Chris Gayle and Kraigg Brathwaite, who built on the good platform that they had set in the final exchanges of Day One.

Gayle had switched on his attacking gears and Brathwaite was finding the boundary ropes at will.  Pacer Tim Southee, in particular was dispatched with utmost glee by the right-hander. Mark Craig, who has been in the thick of everything good for New Zealand with the bat and ball in this series, outsmarted Gayle. The Jamaican stepped down the wicket but the delivery stopped on him and Hamish Rutherford took a safe catch after it spend an age in the skies.

Then Edwards made good use of the good batting surface with some confident strokes and Brathwaite had also brought up his half-century. With Trent Boult and Southee being ineffective in the first session, it was left-arm pacer Neil Wagner who struck for the Kiwis. It was a rather tired shot from the well-set Brathwaite and Southee took a commendable diving catch. Darren Bravo had just come to the wicket and beginning to get his eye in before a cloudburst halted play. 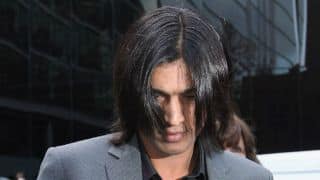