"I would expect a younger team, which lends itself to a bit of failure."

Cantaro (Trinidad): West Indies batting legend Brian Lara has said his team would find it virtually “impossible” to win against Australia in their two-match Test series in June.

Australia on Tuesday named a powerful 16-man squad for the Tests in Dominica and Jamaica, which will lead into their Ashes defence in England in July and August.

The 50-over World Cup champions will face a West Indies side that has won just five Test series in the past five years — three against Bangladesh and one each against Zimbabwe and New Zealand.

“I think it’s going to be tough for us, obviously we’re playing the world champions, they’re full of confidence, even though it’s in another form of the game. In Test cricket, the West Indies tend to struggle a bit,” Lara was quoted as saying by cricket.com.au on Thursday.

“I think the attrition level is not there. We seem to like the T20, we won that World Cup a couple of World Cups ago. I just think in the Test matches, Australia are going to be virtually impossible to beat,” said Lara who has scored 22,358 international runs in a career spanning 17 years.

The 45-year-old said he would not be thinking too much of the results especially when a team is undergoing a rebuilding phase but believes it is only about gaining experience playing against the best team in the world.

“I would expect a younger team, which lends itself to a bit of failure. But as long as you have your priorities set, if it’s rebuilding the team, results really don’t matter.

“It’s about getting the youngsters in, getting them the experience against the best team in the world and moving on.”

The Windies’ training squad for the England series gave an insight into the future of cricket in the Caribbean with highly-rated quick bowlers Miguel Cummins (24) and Carlos Brathwaite (26) joining wicketkeeper- batsmen Shane Dowrich (23) and Shai Hope (21) as the four uncapped players in the squad.

But Lara says rejuvenating the senior side with new talent will do little to reverse the slide of the once dominant cricketing power.

“That’s not the main issue with West Indies cricket… it’s not about whether seasoned players should leave and young players come in,” he said.

“It’s really about the infrastructure that we have, or the lack of it. We’re very poor in that department. Our cricket has been down for quite some time and I really don’t see it turning around in the near future.” 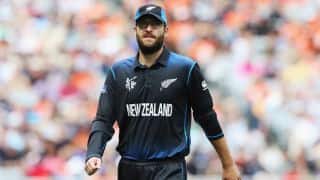