A fine 113 from Yuvraj Singh - his 13th ODI century - proved an effective catalyst in India's comprehensive win over West Indies, only their second against Test-playing opposition in the World Cup. 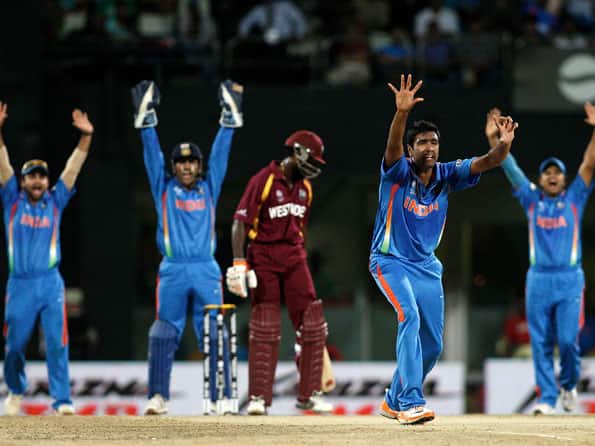 Yuvraj Singh was named the Man of the Match against West Indies.

A fine 113 from Yuvraj Singh – his 13th ODI century – proved an effective catalyst in India’s comprehensive win over West Indies, only their second against Test-playing opposition in the World Cup. A collapse from 218 for three to 268, triggered by Ravi Rampaul, threatened to undo Yuvraj s good work but India rallied to defend that total on a Chennai wicket which has been the fairest of the tournament. Devon Smith and Ramnaresh Sarwan forged a determined stand, but needing 112 to win with eight wickets and 19.3 overs remaining, West Indies combined to lose those eight wickets for 34 runs.

Yuvraj’s innings, which ultimately secured him the Man-of-the-Match award, was the key component in India’s win. He came to the crease with his team in trouble after another poor start but proceeded to take the match out of West Indies clutches as he compiled a defiant century stand for the third wicket with Virat Kohli (59).

Yuvraj was welcomed, unsurprisingly, by a testing spell of short deliveries from Rampaul and Andre Russell. The initial passage suggested the pacers would come out on top, as Yuvraj swayed and swerved and poked and should have been caught at gully when he fended at a lifter from Russell. However, Darren Sammy failed to grab the chance and Yuvraj duly clutched his.

After that initial phase of playing and missing, Yuvraj settled down beautifully to play an innings that formed the backbone of India s effort. Bit by bit, he and Kohli pulled it India s way with pinched runs and angled bats that frustrated West Indies. Only when Yuvraj had picked the length really early did he reach for the ball outside the off stump, and even then he fetched it and placed it rather than trying to give it a thump.

Kohli s uncomplicated approach worked well, and a partnership of 122 for the third wicket set things up nicely before Kohli dragged Rampaul back onto his stumps. By the 40th over, India had crossed 200 and Yuvraj was on 99. However, only 56 runs were collected from the final ten overs, with India losing six wickets. Yuvraj was out soon after crossing three figures, before Rampaul returned for a fiery third spell. Unlike his first spell when he hurried the batsmen into their shots with bounce, Rampaul kept it full and straight at the end and finished with career-best figures of five for 51.

The wickets of the debutant Kirk Edwards lbw to Ravichandran Ashwin – and Darren Bravo caught in the deep off Suresh Raina threatened to make life difficult for West Indies when they replied. Smith cut and drove nicely, and with Sarwan carried West Indies to the safety of 154 for two through generally risk-free cricket. As he did during his century last week, Smith s bottom-handed drives often evaded fielders and left the bowlers muttering under their breath. Every now and then he would advance and go over the top, and having eased past fifty he appeared to have set himself up for three figures.

India were brought back into the game by their two most experienced bowlers. Harbhajan Singh, after bowling four overs for 23, returned to bowl a testing passage of 4-1-7-1. At the other end, Zaheer Khan came back for two overs and made the breakthrough by bowling Smith with a clever slower ball. Harbhajan slowed up proceedings by bowling a maiden to Sarwan, and then extracted Kieron Pollard by enticing the lofted shot. The wobble was on.

Enter Yuvraj and, with the field in, he had Devon Thomas stumped and Russell caught at point In between those strikes, West Indies lost Sammy to a poor piece of running. There was too much to do for Sarwan after the middle order had caved in, and once he held out to deep extra cover off Zaheer, India closed out the match by 80 runs. West Indies insipid collapse proved far direr than India s had earlier in the day.

Bangladesh cricket will come back strongly