The hosts rolled out several commanding performances to sweep New Zealand 4-0 and Campbell on Monday said they were now beginning to show the type of development in character and talent he expected, reports CMC.

“Most of the players have been around for a while and they are beginning to show their experience,” said the former West Indies vice captain.

“The core of the team has been together for a number of years and (this) is now bearing fruit. It shows they are playing well as a team and are now beginning to understand what it means to play at this level.”

The West Indies brushed aside the Kiwis by five wickets in the opening ODI, won by 65 runs in the second before securing the series with a convincing eight-wicket victory. However, the manner of their victory in the last game was particularly remarkable.

Seemingly down and out with New Zealand on 176 for two in the 39th over chasing 215 for victory, the Windies roared back to grab eight wickets for just 34 runs, to pull off a sensational four-run win.

Campbell said both batsmen and bowlers had showed development in the series. “We showed consistency with the bat in the series. It shows the main batters are taking responsibility, building an innings and seeing the games home so that was a positive for me from the series,” said the former Test opener.

“We have some good bowlers. The two opening bowlers Tremayne Smart and (Shekera) Selman showed that on their day they can be match winners.”

West Indies face the New Zealanders in a three-match Twenty20 series starting at Arnos Vale on Tuesday, and Campbell said he was expecting his side’s good form to continue especially in a format in which they were already very comfortable. 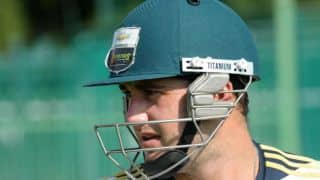