Poor weather meant only 12.1 overs could be bowled on second day, with Leicestershire sprinting to 70 for one in reply to West Indies first innings score.

London: The West Indies‘ hopes of meaningful match practice in the field ahead of next week’s deciding third Test against England were curtailed as rain and bad light cut short their two-day match against Leicestershire. Poor weather meant only 12.1 overs could be bowled on Sunday’s second day, with Leicestershire sprinting to 70 for one in reply to a West Indies first innings score of 377 for seven declared which featured unbeaten hundreds from Shimron Hetmyer and Shane Dowrich as well as Test opener Kieran Powell’s 82. With the second day finishing after lunch, the tourists’ bowlers were denied a substantial number of overs in the West Indies’ last match before the third Test starts at Lord’s on Thursday. It’s do-or-die for us at Lord s, says Stuart Broad

Nevertheless West Indies coach Stuart Law, who saw his side bounce back to square the three-Test series with a stunning five-wicket win at Headingley on Tuesday after their innings defeat at Edgbaston, was pleased with what what practice his side did manage in Leicester. “The first day worked out well for us,” Law said, with the former Australia batsman adding: “The boys who haven’t been scoring runs got time in the middle, and that’s what it’s all about in these conditions.” Sunday saw Pierre de Bruyn resign as Leicestershire coach with immediate effect. WI announce 13-member squad for one-off T20I vs ENG

The 40-year-old was promoted from his position as assistant coach when Andrew McDonald opted to return to his native Australia at the end of last season. But, despite reaching the Twenty20 Blast quarter-finals this season, Leicestershire failed to get out of their One-Day Cup group and the Midlands side are currently bottom of the Second Division of the first-class County Championship without a win. Hope earns praise from Holder, Kraigg post 2nd Test win vs ENG

“I would like to thank the board of directors for the great opportunity to become head coach of Leicestershire County Cricket Club,” De Bruyn said in a statement. “It has been a fantastic experience.” Leicestershire chairman Paul Haywood added: “The board of directors place on record its thanks to Pierre for his hard work and efforts over the last two years but it has been mutually agreed that it is the right time for a change in the head-coach position. Graeme Welch and John Sadler will take charge of the first team for the final few weeks of the season. 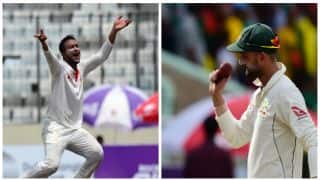 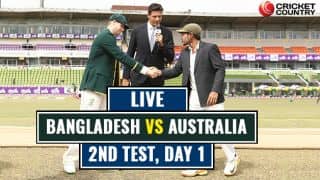