Inclement weather continued to play spoilsport as the start of fourth day's play in the first India-New Zealand cricket Test was delayed due to light drizzle and wet ground conditions. 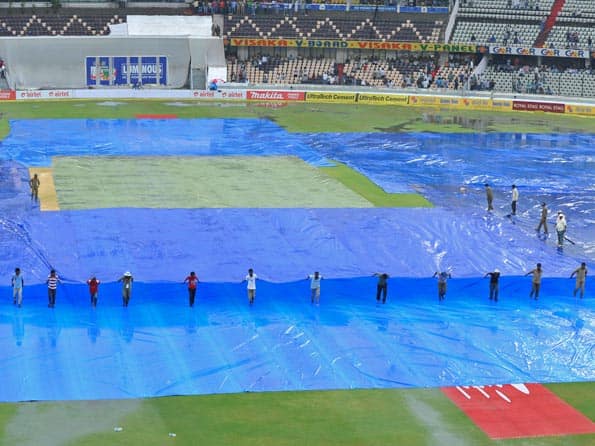 Inclement weather continued to play spoilsport as the start of fourth day’s play in the first India-New Zealand cricket Test was delayed due to light drizzle and wet ground conditions.

The morning drizzle stopped around 9 am, the advanced scheduled time, but the waterlogged field at the Rajiv Gandhi Stadium meant that India, chasing a big win, were in for a frustrating wait.

The Hyderabad Cricket Association groundsmen were optimistic about making the ground ready for play in another one hour, which would mean the loss of the first session.

But the situation looks bleak given the weathermen have predicted more scattered rain in the next two days.

At stumps on day three, New Zealand were 41 for one, following on in their second innings with Brendon McCullum (16) and Kane Williamson (3) occupying the crease.

Only 37.3 overs, including 18 in New Zealand’s second innings, could be possible yesterday as the third-day’s proceedings had started an hour behind schedule.

Resuming at 106 for five, New Zealand were bowled out for 159 in the extended first session yesterday. India notched 438 in their first innings.

The second day’s proceedings too were delayed as the groundsmen were told to keep the covers on in anticipation of rain that never arrived. (PTI)

Under 19 Cricket World Cup 2012: Australia set 226-run target against India in the final