MS Dhoni remained unknowable in his retirement from international cricket but childhood coach Keshav Ranjan Banerjee on Sunday (August 16) said criticism and speculations around his long sabbatical may have played a role.

The 39-year-old Dhoni bid adieu to international cricket on August 15, bringing the curtains down on a glorious career.

His last outing in India colors was during the lost World Cup semifinal against New Zealand in July last year.

Ever since he went on a sabbatical after that match, speculation raged over his future but he stoically avoided a response for over a year.

“Of late, there has been a lot of criticism about him in the media that how he can return to international cricket as he’s not played a single match since the 2019 World Cup semifinal in July.

“I don’t know but it may have played a role in this decision. Only he (Dhoni) can throw some light into it,” Banerjee said.

Banerjee, who first introduced ‘footballer’ Dhoni to cricket during his school days at the Jawahar Vidya Mandir in MECON, maintained that his “favorite student” was still fit to play for India for another one year.

“Yes, I had said he could have played for one more year easily including the next T20 World Cup. And I still maintain that.

“Looking at his fitness level, he could have easily played. It’s not just my opinion but many others thought the same way,” an emotional Banerjee said.

“There is an end to everything. Yes I’m heartbroken but, at the same time, you have to take control of your emotions.”

The two-time former World Cup-winning captain will go down as one of the finest to have played the game for India, turning up for the country in a whopping 350 ODIs, 90 Tests and 98 T20 Internationals.

“I’m sad for just one thing that we won’t be able to see no.7 jersey anymore. Everyone has to retire at one point of time. But it’s a sad moment. I don’t think Team India should give this jersey to anyone. He is a legend and no.7 will always be for Dhoni.”

He will, however, compete in this year’s IPL, which gets underway in the UAE from September 19 after being moved out of India due to the COVID-19 pandemic.

Dhoni’s announcement came a day after he joined his IPL franchise Chennai Super Kings for a camp ahead of its departure for UAE.

Asked whether the COVID-19 pandemic impacted his decision, Banerjee said it’s all hypothetical.

“He’s not the only sportsperson to be affected by the pandemic. All players are affected. It’s a hypothetical situation. T20 World Cup is postponed for now. He has made up his mind. It’s his decision. Like always this too was a surprise for all of us.”

When asked how eager would Dhoni be to fire in the IPL, Banerjee said: “Only we will see how he will do. Every match is like an examination for a cricketer and everyone will see how he does for CSK this time.” 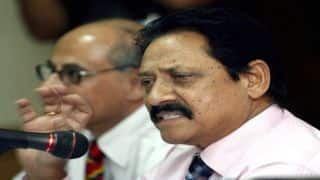