There has been many chases in the history of cricket and this was surely one of the best despite the loss.

In the ongoing Royal London One-Day Cup, an excellent contest was witnessed on Monday at Trent Bridge between Nottinghamshire and Northamptonshire. It was fourth match of the tournament, second in North Group and first for both the teams in this season.

The home side — Nottinghamshire won the toss and elected to bat first and their opener Michael Lumb and Riki Wessels did an excellent work with the bat. Every bowler of Northamptonshire looked helpless in front of both these openers as they were unstoppable and were not giving any chance to the opposition for making a comeback. They added 342 runs together for the first wicket in 39.2 overs under the sunny sky. This record breaking stand broke the previous best record of highest stand in England — 318 by Rahul Dravid and Sourav Ganguly in 1999 World Cup at Taunton against Sri Lanka.

At one stage, it looked like both are going to score double centuries but thanks to Stephen Crook who provided the first breakthrough for Northamptonshire by scalping Wessels at the score 146 from 97 balls, which also included 14 fours and eight sixes.

Soon, Lumb too walked back to the pavilion after making 150-ball 184 with the help of 21 boundaries and six sixes and from there on wickets kept falling like nine pins. But the run rate kept ticking. Josh Cobb took three useful wickets but Northamptonshire bowlers couldn’t stop them from scoring a humongous total of 445 with the loss of eight wickets. Their total of 445 is the second highest in List A matches worldwide after Surrey’s 496 in 2007 against Gloucestershire.

In return, Northamptonshire began their chase with immense confidence but the journey looked impossible at first. But one should never forget how South Africa chased the total of 434 against Australia in a One-Day International (ODI) match earlier. Northamptonshire had a blasting start as both the openers Cobb and Adam Rossington started hammering every Nottinghamshire bowler from the outset. But soon, Cobb’s got out in the seventh over and like their opponent, they too started losing wickets after the first one.

Rossington was the one who stayed at the crease and kept his side alive in the chase. In between five wickets were scalped and then Rory Kleinveldt joined the opener in the middle. Both of them showed no mercy to any bowler and at one stage it looked like they are going to win this convincingly. But then Rossington got out after scoring a brilliant 69-ball 97. Kleinveldt continued his hammering and scored 63-ball 128, including 10 fours and nine sixes. But the moment Kleinveldt fell in 45th over of the match, Nottinghamshire bowlers made a comeback. At that time, Northamptonshire needed 50 from 32 balls, which looked gettable but fall of wickets made them lost the match by only 20 runs. Both the teams collected 870 runs together in this amazing run-fest and fell two runs short of the world record. 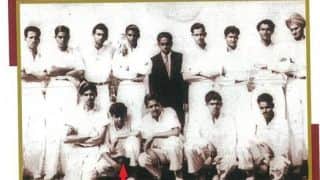 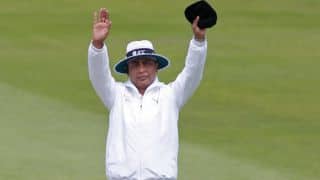