Though the quotes from Virat Kohli reveal more on his close relationship with Anushka Sharma, they also give fans insights on the timing of the captaincy exchange.

They do not discuss their relationship in public but Virat Kohli and Anushka Sharma never fail to grab headlines. 2016 was all about their alleged break-up and Anushka being trolled on social media for absurd reasons but when the time came, Kohli stood by her side. Though the two youth icons remain tight-lipped about their romance, they have shared plenty of pictures in recent times from their holidays to Valentines Day celebrations to make things evident. Anushka recently even warned Kohli not to shave by posting a comment on Instagram.

In a recent interview with Star Sports, Kohli took a step ahead and revealed how special the Bollywood star is to the cricketer. Kohli mentioned that he was very emotional when he was declared the Indian captain across formats and sharing the moment with Anushka made it even ‘more beautiful’. PHOTOS: Virat-Anushka are back together? Go for late night dinner

I was in Mohali and there was a Test series going on. I was with Anushka then, she had come to visit me. Surprisingly, when I was made Test captain, then also she was in Melbourne with me. That was a very special moment we shared together, said Kohli. During the Mohali incident, they had spoken to me already. When I hung up the phone and told her, for me it was like a flashback. From the moment, I started playing in my academy till the Mohali game. I was emotional; I was in tears because I had never thought that I will see this day. What was more beautiful was that, I was able to share it with Anushka. It was something that I will always remember, he added.

Though the quotes from Kohli reveal more on their close relationship, they also give fans insights on the timing of the captaincy exchange. The Mohali Test that Kohli mentions was played between November 26 and 29, 2016 but it was only in the first week of January when MS Dhoni called it quits as ODI and T20I skipper. Did Dhoni step down or he was asked to step down? Did Dhoni make his decision a month-and-half back? These will be some interesting questions that the fans will like to know about. 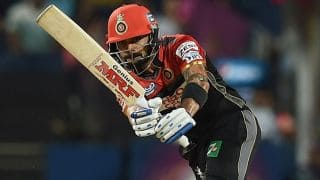