The legendary coach passed away in Mumbai on Wednesday.

Each and every teacher in this world would aspire to have a student like Sachin Tendulkar but in iconic batsman s own words, it was a late cut (a tight slap) from his beloved sir Ramakant Achrekar after missing a match, that made him realise the importance of hard work.

Tendulkar, along with another 100 students of Sharadashram Vidyamandir celebrated their beloved guru s 79th birthday at the Bandra Kurla Complex on Saturday (December 4, 2011).

Obviously, the centre of attraction at the reunion was none other than Tendulkar as Achrekar s students fondly recollected the old days.

As he took a trip down the memory lane, it become an emotional journey not only for Tendulkar but also for former India players like Ajit Agarkar, Pravin Amre, Balwinder Singh Sandhu, Paras Mhambrey, Chandrakant Pandit, Sameer Dighe to name a few.

After finishing school, I used to hurry to my aunt s place for lunch and by that time, sir used to organise some matches for me. He used to tell the opposition teams, that I would be batting at No. 4.

On one such day, instead of playing in the match, I along with a friend, went to the Wankhede stadium to watch the Shardashram English-medium boys take on the Shardashram Marathi-medium boys in the Harris Shield final and cheer our team, Tendulkar fondly recollected.

There, we spotted sir and went to greet him. He knew that I had missed the match, but still asked me how did I perform in it. I told him that, I thought that I would skip the match in order to cheer for our team. I got a late-cut (tight slap) on my face as well. The tiffin box in my hand flew and all its contents spread across, he said.

At that time, sir told me You don t have to be here to cheer for others. Play in such a way that others cheer for you . Since that day, I began practising very hard and put in a lot of hours. If not for that day, I might have been cheering others from the stands, he said.

On a night, when all of Achrekar s wards narrated with pride the stories of how they got slapped by their guru , the world s most worshipped cricketer credited Achrekar for his capacity to run for long hours without tiring.

When I was batting, sir never asked me to do the rounds (running across Shivaji Park), the maestro said.

However, at the end of my training session, when I was completely exhausted, he used to make me run in full gear, along with the bat and pads. It was only later, that I realised how much this helped me, Tendulkar said.

Someone who rarely displays his emotional side, Tendulkar said, I don t know how much cricket is still left in me. However, whatever I have achieved so far is all due to Achrekar sir.

Tendulkar also recalled another anecdote involving him and buddy Vinod Kambli, when the left-hander was slapped by Achrekar for flying a kite, while fielding during a match.

Vinod was flying a kite while on the field. I warned him saying that sir might watch him. But he said he had scanned the entire place and was confident, sir was not there.

And then it was Kambli s turn to get a tight one from Achrekar. And at the next instant, he got slapped. Later, Kambli and I were arguing as to how sir could have seen it.

Actually, I had seen sir watching him from behind a tree, but I didn t tell him, he added.

Tendulkar informed that the idea to give Achrekar a surprise by organising the reunion of the Shardashram Old Boys came during a conversation with former Mumbai cricketer and a close Tendulkar friend Atul Ranade.

Several other cricketers, too, recounted heart-warming tales of how Achrekar and his family had made an important contribution in shaping up their lives.

Sandhu, a member of the 1983 World Cup winning team recalled that it was Achrekar, who had advised him to develop his inswinger, when he started as an off-spinner during his younger days. I was an off-spinner, but sir advised me develop my inswinger. He had an eye for talent, he said.

Sandhu also narrated an incident, when he was spared of Achrekar s slap for shirking doing rounds, which changed his way of looking at cricket.

Without saying much, he told me that I was talented and had a responsibility to fulfill. My perspective towards cricket changed from that day, he added.

Former India stumper and Mumbai captain Pandit remembered the day, when Achrekar came to his house at midnight to convince his reluctant father to let him join Shardashram.

My father did not see a future for me playing cricket. His argument was that how could the game help me when all I had to do was to study and get a job. At this, sir took Rs 1,000 from his pocket, gave it to my father and said from tomorrow, your son is mine, I will pay his salary. His faith in me made me confident that I had the talent to do well, Pandit said.

Another bright student of Achrekar, speedster Agarkar remembered as to how Achrekar came to his home on his motorcycle at 5 am just after the 1992 riots in Mumbai to take him for practice after assuring his worried mother. We did some training and I had breakfast at his place. But that incident made me realise the importance of discipline and determination, he said.

Veteran Mumbai batsman Amol Mazumdar recalled how slaps from Achrekar had made him learn to do namaste in a proper way, treat the Shivaji Park ground as a temple, and never to say no for a match.

Recently, I was doing a Level-I coaching course. During the coaching sessions, I could recollect that Achrekar sir had taught us everything being taught there through presentations. That being in the 70 s and 80 s. He was way ahead of his time as a coach, he said.

In a heart-warming gesture on the occasion, Achrekar s long-time assistant Das Shivalkar was presented with a cheque of Rs 1,25,000. 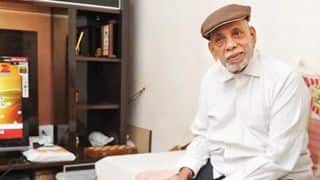