Kings XI Punjab (KXIP) are hosting Royal Challengers Bangalore (RCB) in Match 29 of IPL 2016 at Mohali and on the other hand, commentators were at their best to entertain the crowd. Danny Morrison was found in an unusual get up as a ‘Sardaar’. Morrison was present during the toss with two captains Murali Vijay, Virat Kohli and as he is known to be filled with excitement in every match, he got tried to bring some of those fun moments amongst a tensed situation. IPL is not providing any entertainment this time as probably the overdose of T20 cricket is pulling off the attention, especially after the completion of mega tournament Asia Cup T20 2016 and ICC World T20 2016. So IPL is trying all the possible ways to keep their crowd glued to the league. LIVE CRICKET SCORECARD: Kings XI Punjab vs Royal Challengers Bangalore, IPL 2016 at Mohali

Meanwhile, RCB seem to be in trouble after skipper Virat Kohli and KL Rahul were off to flying start securing 63-runs stand in 7.2 overs. Until KXIP got into attack KC Cariappa who went off the mark with first grabbing Rahul for 42 and in no time Kohli was dismissed for 20. This did not prove to be the day for captain Kohli. No.3 saw Shane Watson with a hope to build in some runs on board, unfortunately he was gone too soon with KXIP spin attack Akshar Patel off the mark grabbing his opportunity, dismissing him for 1.

RCB are currently playing at 121 for 3 in 15.3 overs against KXIP. RCB need to win all their matches now in order to secure their place in Playoffs. As for KXIP, after disastrous start to their campaign, the only hope will be to continue their winning momentum to move up the ladder in Points Table of IPL 9. 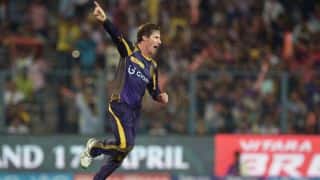