Mayank Agarwal has had a dream beginning in Tests. The opener is into his eighth match and already has 615 runs from 11 innings at an average of 55. 90 with three centuries, two of which he’s converted into a double. On Friday, Agarwal scored the second of those, hitting 243, and going past Sunil Gavaskar’s highest individual score. India’s run-machine has been unstoppable, having already excelled in Australia and not continuing at home.

For a long time, when he was a regular feature for Karnataka in India’s domestic circuit, Agarwal was getting out in the 20s and 30s. Then came the record-breaking season 2017-18, in which Agarwal scored over a 1000 runs on First-Class cricket and was the leading run-scorer in the Ranji Trophy with 1160 runs. Safe to say, Agarwal has taken his wonderful run forward in international cricket, recording double centuries in back-to-back Test series.

“I think it goes down for me at least, to understanding that there have been times where I’ve not got runs,” Agarwal said at his press conference at the end of the second day’s play in Indore. “So I must respect the game, that I am batting well. When I am doing that, I need to make sure that I make it big and put the team in the driver’s seat or put it in such a position that we cannot lose from there.

“So I think that becomes key. Knowing that you are batting well, and you’ve got your hundred, you’ve got to make sure – it’s on you to take the team ahead.”

Agarwal was drafted in the side during India’s tour of Australia late last year, a series in which Prithvi Shaw was supposed to open for India before he injured himself in a practice match. Shaw, touted to be the next big thing in Indian cricket, was replaced and so far, his absence hasn’t been felt with Agarwal seizing the opportunity with both hands. With Rohit Sharma also excelling as an opener in Tests, India’s opening combination looks sorted for now.

“My journey is not going to be same as someone else’s and I don’t like comparing two people’s journey because somebody might get chance quickly and somebody might get chance late,” he said. “But that (chance) is not under our control and it is important to understand the things that are in my control and think I’m glad to play for the country and from there build on.”

Agarwal was imperious with his shot selection, often chipping down the wicket and disdainfully whacking spinners Taijul Islam and Mehidy Hasan over the top. He hit eight sixes, all against the spinners and his control percentage was 96 – bloody amazing for a batsman facing 330 balls.

“I think it goes down to gameplan. Who you are feeling comfortable against and who you want to attack and then pick the right balls. You can’t just say that okay I am going to hit each and every ball. You can’t do that. It’s not going to happen that way,” he said.

“It’s a case of understanding, okay, this is the bowler I am playing well today and this is the ball that I can go after. Pick those balls and then have mental discipline to build your innings on that. The wicket had settled down compared to what it was yesterday. It got better to bat on as there is good bounce and good value for your shots.”

There was a moment in play before lunch, when Agarwal was given out wrongly by umpire Marais Erasmus. The decision was followed by a look of utter disbelief. After consulting Ajinkya Rahane, Agarwal referred the decision and got it overturned. At that moment, he breathed a sigh of relief, and went on en route to a career-best 243. Agarwal said it reminded him of a recent incident against West Indies in the Caribbean.

“Initially when I got hit on the pad, I thought I wasn’t out,” he said. “But then when I was given out, I had a quick flashback because I got out the same way to Roston Chase in West Indies. So I said I can’t make that mistake again. I was glad that it was missing. At some point I thought, maybe it might just be umpire’s call and I was doomed.” 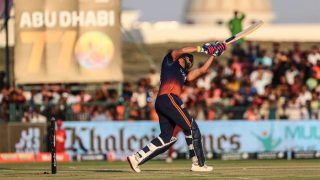