One of Sri Lanka's greatest batsmen Kumar Sangakkara announced on this day in 2015, that he would retire after the second Test against India at Colombo

On this very day last year, one of Sri Lanka’s greatest cricketers announced that he would retire from international cricket soon. Yes, Kumar Sangakkara, on June 27, 2015 confirmed that he would be retiring from international cricket after the second Test of his side’s series against India. The Sri Lankan batting maestro, then 37-years-old, had 12,305 runs in 132 matches for Sri Lanka in Tests and 14,234 runs in 404 One-Day Internationals (ODIs). The wicketkeeper-batsman had a highest of 319 runs in Tests and was a role model for Sri Lanka’s young players back then, and continues to be now as well. His fans were hoping that they would see another century from the left-hand batsman but it didn’t go that way. ALSO READ: Kumar Sangakkara retirement: Cricketing fraternity bids him emotional adieu

Sangakkara while making the big decision said, “I have decided to call it a day on my international career during the second Test of the Indian series.” ‘Sanga ‘ could not manage a half-century in the two Tests against India of the three-match series though. His scores in the last four innings were 5, 40, 32 and 18. He was although given a guard of honour by the Indian team and the umpires too when he came out to bat for the last time. He was a victim of Ravichandran Ashwin’s brilliant spin bowling for the fourth consecutive time in the series and was out for 18 as Sri Lanka would eventually lose the match by 278 runs. WATCH: VIDEO: Kumar Sangakkara’s final dismissal in India vs Sri Lanka 2015, 2nd Test at Colombo

He gave a retirement speech in front of his countrymen that certainly left them emotional. While India won the series, the day was meant to acknowledge one of the greatest batsmen in cricket’s history. Indian Test captain Virat Kohli too said that it was a pleasure playing alongside him as tributes poured in from all around the cricket fraternity. However, Sangakkara’s departure was about to leave a huge void in the Sri Lankan cricket team. 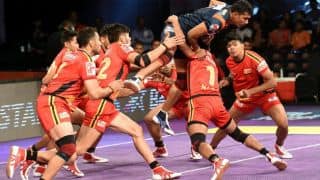