Kyly Clarke and Shane Warne were the first few people to know about Michael Clarke's decision to retire.

Outgoing Australia Test skipper Michael Clarke announced his decision to retire from international cricket at the end of the fifth Ashes Test at The Oval in London. In his column for Daily Telegraph he wrote about how his long-term friend and wife, Kyly Clarke, asked the cricketer what will happen if Clarke managed to score a century in the final Test. Kyly, however, was not the only one with the same question. Shane Warne, former teammate and a good friend of Clarke, was the second person to know about the skipper’s decision to retire. Clarke wrote, “Kyly and Warnie both gave me that support.”

“He asked if I made a hundred in the next game would that change things? What if you do win the next Test, would that change things? Kyly was asking me similar questions. She sees how much I’ve given to this game on a daily basis. She still saw this hunger inside me to do all this work and asked if I was sure I was ready. The answer is I am ready.”

Clarke is expecting his first child. Clarke also wrote about mentioning the news of retiring to his grandfather Ray Fox.

“He was very emotional. Pop’s made it clear to me over the past 10 years that watching me play cricket is a big part of what keeps him going. I tried not to let emotion overcome me — I’ve done too much crying over the years. I spoke to mum, dad and my sister as well and they feel for me because cricket has been the one common denominator for me my whole life,” Clarke wrote.

Clarke’s family, even his grandfather, were present at Bangalore when he made his Test debut during the Border-Gavaskar Trophy 2004-05 series in India. 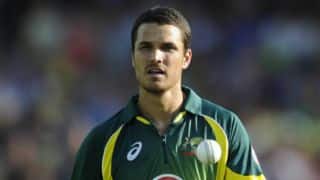