It is now safe to call Virat Kohli one of the fittest athletes in the world of sports. His physical transformation has been a benchmark for sportsmen and its impact on his game is on exhibition.

Earlier this month, Virat Kohli made a very interesting comment: I take a lot of inspiration from Cristiano Ronaldo. The way he has stayed on top for so many years, it is nothing but down to hard work. I have heard he is the most hardworking footballer in the world and that s why he is where he is. Messi is a freak (genius) but this guy (Ronaldo) is giving him run for his money because of his hard work. The Real Madrid star is a template for fitness and Kohli has made it known that is the level he wants to emulate.

It is now safe to call Kohli one of the fittest athletes in the world of sports. His physical transformation has been a benchmark for sportsmen and its impact on his game is on exhibition. Even Sunday night’s hero during India versus England first ODI, Kedar Jadhav, admitted that it is impossible to match the fitness level of the Indian captain. Inspirations are not enough; they have to be backed by sacrifices. In a recent interview with a popular sports website, Kohli’s childhood coach Rajkumar Sharma recollected days when his ward would gorge on butter chicken and kathi rolls, which no has “no place in his diet” now.

Kohli once told me, if I don t set the benchmark as captain, who else will? Even as the world looks on in wonder, I know the boy behind the man. He used to gorge on butter chicken, rolls and all sorts of fast food. But today, it finds no place in his diet.

Train hard or dont train at all. Hard work has no shortcuts. Love my lifting sessions.

In fact, he is so particular about his diet, that even when he comes over to my place, he won t have packaged juices. You either give him fresh fruit juice or you don t. Carbs are a strict no-no and there are no binge days in his routine anymore, Rajkumar revealed in an interview with CricketNext.com.

Kohli’s journey to pinnacle continues to cross the difficult of sacrifices and work ethics but it is dedication that makes his coach more proud.

See, it is easy to do these things for a short or particular span of time. But to make it a constant routine and lifestyle is what makes me proud. The kind of sacrifices he has made at this young age is something that even we cannot at our age. It takes a lot of devotion and focus to restructure your lifestyle to this extent. He has cut down on carbs and does not even have rotis now. It is either grilled or boiled food for him. Even his coffee is without sugar and definitely no packaged juices for him,” the coach further added.

Rajkumar, who won the Dronacharya Award last year, did not want to take the credit for Kohli’s success.

I would be lying if I take all the credit for this. Yes, I did suggest working out for a couple of hours and maintaining discipline, but credit also goes to the trainers in the team as they made him further believe the importance of physical fitness and its direct effect on the game,” he said

He further emphasised on Kohli’s eating habits that has taken his fitness to the next level. Kohli takes it so seriously that he has got a gym built in his house. According to the coach, Kohli s goal lies in “raising the bar.”

The fitness regime has helped him increase stamina as he can pick quick singles and doubles without tiring and ensures runs come at a brisk rate, taking out the risky shots element from his game.

“Whatever be his work schedule or travel scene, he always finds time to hit the gym, the coach revealed proudly. 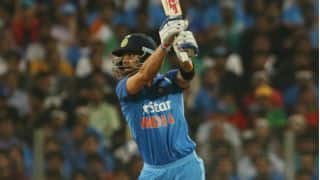