Australia's T20I skipper is ready to bat anywhere just to achieve the dream of becoming a Test cricketer.

Aaron Finch has scored 4957 runs for Australia in limited-overs cricket without earning a Baggy Green, which stands as the record for most international runs scored without playing Test cricket. Now, after earning a maiden call-up to Australia s Test team for the October tour to the UAE, the 31-year-old is itching to get a game against Pakistan.

And he s ready to bat anywhere just to achieve the dream of becoming a Test cricketer.

“I’d bat number 11 if I had to,” Finch told reporters with a laugh in Brisbane on Monday. “It would mean a lot. You grow up in the backyard dreaming of playing Test cricket and getting a Baggy Green. It’s closer now than it ever has been before.”

Finch s call-up for the Test series against Pakistan has come after a year in which he had racked up 900 runs at an average of 69.23 and strike-rate of 132.15 in 17 international appearances for Australia, which includes three ODI centuries and a world record 172 and two fifties in T20Is.

Now, as the prospect of a Test debut looms, the Victorian batsman said he will not need major changes to his game.

“Being aggressive has made me reasonably successful in international cricket in the two shorter formats,” said Finch. “Playing for 10 or 12 years you build up a game plan you think works for you pretty well. It’s not about going away from that because it’s Test cricket or you’re playing in the subcontinent – it’s about just changing your mindset slightly.

Depends on the order they see me fitting in if there’s a spot in the XI. If it’s at the top, it’s about playing your natural game. If it’s in the middle, there will be times when you come in against a lot of spin and the ball is reversing. Pakistan are a side that tend to bowl a lot more spin with the new ball, particularly in the second innings. It’s just about sticking to your natural game, playing to your strengths. When that happens, you give yourself a higher chance of success. 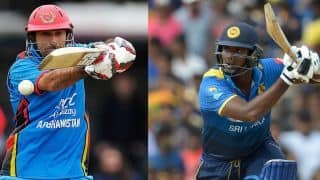 Asia Cup 2018, 3rd ODI, LIVE Streaming: Teams, Time in IST and where to watch on TV and Online in India