England pacer Tim Bresnan feels the 0-5 ODI series whitewash at the hands of India cannot take the sheen off his team's spectacular rise in an "unbelievable" year. 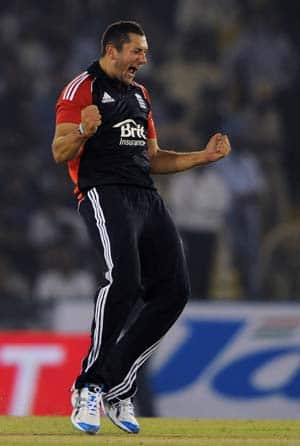 England pacer Tim Bresnan feels the 0-5 ODI series whitewash at the hands of India cannot take the sheen off his team’s spectacular rise in an “unbelievable” year.

England are number one in ICC’s Test and Twenty20 rankings and Bresnan said being on top in two formats of the game is quite an achievement.

“To be No 1 in two out of three competitions, we are not in a bad place really, are we, especially in Test cricket, which is the pinnacle,” Bresnan was quoted as saying by ‘The Daily Telegraph’.

“I think the way we’ve played this year has been fantastic but we are still looking to improve and churn out results,” he added.

England managed to end the tour of India on a high by winning the lone Twenty20 match on Saturday.

The team has had a memorable year, retaining the Ashes and whitewashing India in all three formats of the game earlier this year. The 0-5 loss to Mahendra Singh Dhoni’s men in the return ODI series earlier this month was perhaps the lone disappointment for them.

Bresnan said among the most cherished moments of the year was winning the Ashes and being presented with the ICC World Test Championship mace after England beat India 4-0.

“We’ve had a lot of good times over the past year. It’s tough to single one thing out but it has been an unbelievable year,” he said.

To see your hard work over a number of years come to fruition, and gaining No.1 Test status, was fantastic. It was something we set our sights on four years ago and we achieved our goal,” he added.

“We are still looking to improve all aspects of our cricket. This is a chance to recharge the batteries and the lads are looking forward to it. The last year has been quite intense for us.” (PTI)

Important for India to nurture Varun Aaron and Umesh Yadav