Dwayne Bravo has said that he and fellow West Indian Kieron Pollard decided to wear jerseys with identical No. 400 on them for respective teams Chennai and Mumbai in the Indian T20 League opener.

Dwayne Bravo has said that he and fellow West Indian Kieron Pollard decided to wear jerseys with identical No. 400 on them for respective teams Chennai and Mumbai in the Indian T20 League opener here yesterday, to celebrate individual landmarks.

“Pollard is the first player to play 400 T20 games. So he has 400 on his back. And I’m the first bowler to get 400 wickets. So the both of us said – okay, if we both play the first game in the tournament, let’s do something different,” he said.

Bravo was speaking after his match-winning 30-ball 68 that guided Chennai to a thrilling one-wicket victory with one ball to spare.

“It’s a great milestone for both of us personally. Pollard spoke to Mumbai, I spoke to Chennai and they allowed us to play in this game. Moving forward in the tournament, we both will go back to our respective numbers – 47 and 55,” he said.

Bravo, who smacked 7 sixes and three fours to pulverise the Mumbai bowlers who conceded 50 runs in the last three overs, said being in the mid-thirties he had to be wary of his body after coming back from injury that put him out of action for a lengthy period of time.

“Well, it’s on my mind in terms of I had to be more careful and I’m no longer 24 like how I used to be before so I have to be very cautious, and as I said I started very slow and just needed to get momentum going into the game,” he said.

“But as you can see, as the game picked up especially in the later stages, this is where I’m more specialised and this is where the team needs me the most – at the close of the game. The captain (MS Dhoni) showed faith in me and this is basically my role in Chennai team – to finish off games,” he said.

“Fitness is very important but we have a very good medical team,” he added. 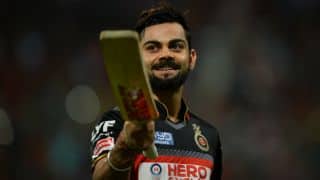 Virat Kohli gives up opening slot for Banglore; will bat at No.3