Jonty Rhodes, the former South African cricketer and the present fielding coach of Mumbai Indians on last Thursday, became a father of a baby girl. Jonty, and his wife Melanie named their new born daughter ‘India’. Recently talking with the media, ever smiling Rhodes explained he chose to name his daughter India. READ: Jonty Rhodes blessed with baby girl; names her ‘India’

Talking to Mid-day during a practice session of Mumbai Indians, he said. “I have spent a lot of time here [in India]. What I love about India is that it’s a rich mix of culture, heritage and tradition. It is a very spiritual country, very forward-thinking nation. I really like that combination. You have to have a good balance of life. With the name like India, she will have the best of both worlds and that sort of balance.”

The baby was born at 3.29 in the afternoon, and weighs 3.7kg. “What we really like about India is that everyday we discover something new about this country. As people, we like discovering things about yourself and that’s hopefully what she [the baby] will also discover,” added Rhodes.
Jonty, and his wife Melanie traveled to India several times. Talking about that the South African said, “She really enjoys coming to India. She’s learnt yoga. She loves the fact that you can go from mountains to oceans… there is a lot of diversity [in India]. So, we weren’t really concerned [about naming her India],” said Rhodes. However, he is not the first player to name his child after a country.Though Rhodes is not the first person to have a child named after this great country. Former New Zealand pacer Dion Nash also named his daughter India and Rhodes knew it. “So, we are not the first ones. In fact, there are some kids in South Africa (too) named India. But I have my reasons to give her this name. It’s more to do with the cultural and traditional diversities of India,” the proud father signed off.
First Published on
Last updated on April 26, 2015 5:33 PM IST
TOPICS:
South Africa Mumbai Indians Jonty Rhodes 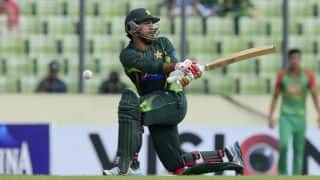