The post fell vacant when Barbadian Ottis Gibson was axed two weeks ago.

West Indies Cricket Board (WICB) chief executive Michael Muirhead said that no decision has been made yet on who will fill the vacant post of West Indies head coach and there will be no mad rush to find the candidate. Media reports in recent weeks have indicated that Mickey Arthur was a virtual shoo-in but Muirhead said while “informal” discussions had been held with the South African, the WICB were yet to even start the interview process, reports CMC.

“There is absolutely no truth to that talk around the region that Mickey Arthur will be hired as the next coach. We did speak to him and many other coaches recently because it was convenient to do so but to say he will be the next coach is not true,” Muirhead said.

“We don’t know yet who will be the next coach. The talks with Arthur were very, very informal. No official interviews for the position have even started.”

The post fell vacant when Barbadian Ottis Gibson was axed two weeks ago just prior to the start of the One-Day International (ODI) series against Bangladesh in Grenada. Gibson spent just over four years in-charge of the team in which time he oversaw their capture of the 2012 World Twenty20 in Sri Lanka.

His appointment followed those of Australians Bennett King and John Dyson but Muirhead said the WICB would not be limiting itself to regional applicants only.

“We don’t plan to rush this process. We will go through each interview at our own pace and no one will be given preferential treatment. The response has been good so far.”

Significantly, the West Indies are without a coach ahead of their Test and ODI tour of India starting in October and the World Cup which starts in Australia and New Zealand next February.

However, Muirhead said the WICB would not allow itself to be pressured into a deadline because of pending tournaments.

“That (World Cup) would be considered a nice cut-off time to have a coach by but we don’t plan to rush and get a new coach just to say we have a coach for the World Cup,” Muirhead stressed.

“We are getting a feel for the market out there before we make a decision. If we do find who we feel is the right person and we find him before the start of the World Cup, then so be it. But we certainly don’t plan to short-change ourselves in finding a new coach. We feel we can also find the right person after the World Cup if that is necessary.” 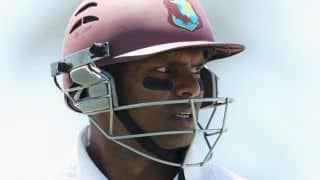