BCCI has decided to reply after consulting with its members during the AGM in Chennai on November 20.

Board of Control for Cricket in India (BCCI) secretary Sanjay Patel said that the West Indies Cricket Board (WICB) has sent “an apology letter” for the sudden cancellation of India tour by their players after an internal payment dispute.

“We have received a letter from WICB a couple of days ago. It said that they are apologetic and bankrupt and they urged us to resolve the issue through the Disputes Committee,” Patel told the mediapersons at Cricket Centre.

However there are reports from a reliable source in the BCCI that world’s richest cricket body has informally proposed to WICB to part with 50 per cent of their imcome earned through revenue sharing of ICC till 2023.

It is estimated that WICB stand to gain USD 100 million from the ICC during the next eight-year cycle and BCCI wants atleast USD 50 million of that through installment to cover up for the loss of revenue. BCCI has decided to reply after consulting with its members during the AGM in Chennai on November 20. 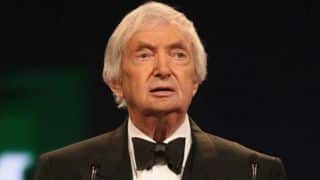