Glenn Maxwell, left out of Australia‘s Test squad for the upcoming Pakistan Tests at the UAE, bashed the Queensland bowlers in the JLT One-Day Cup match at Tony Ireland Stadium, Townsville for a 91-ball 80. Maxwell hit eight fours and a six against an attack consisting of international cricketers Billy Stanlake, Mitchell Swepson, and Jack Wildermuth. His fourth-wicket stand of 101 with Nick Maddinson (68) helped Victoria put on 240.

Queensland were then undone by Will Sutherland, son of James. Sutherland took out Sam Heazlett (who played an ODI against New Zealand earlier this year) and Chris Lynn in the third over. Switching ends, he took three more wickets, leaving Queensland in tatters at 78 for 6.

Sutherland, 19, had played only three List A matches last season to complete school. Earlier that season he had taken another major decision, that of foregoing a promising AFL career.

Joe Burns (25) helped push the score to 145 for 8. Then Swepson launched an onslaught, smashing 77 in 78 balls with 9 fours and adding 77 with Xavier Bartlett before Chris Tremain dismissed both. Tremain did not make it to the Test squad either, despite being in outstanding form over the past two seasons.

“It’s good to be back,” Sutherland later told cricket.com.au. “It’s great to have those experiences under the belt a year ago, they gave me confidence coming into today. I felt really prepared.”

Maxwell, too, heaped praise on Sutherland: “He’s a star. He’s a very good young player … Big, tall guy, moves the ball around, hits a great length and hits the seam. It makes it difficult for batters if you’re getting that movement off the wicket and pressuring their defence all the time. He’s just got a really level head about him. Hopefully we can see him with the bat because he’s some really good skills there as well.”

Player of the Match: Will Sutherland. 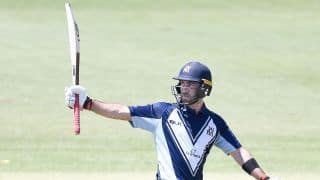 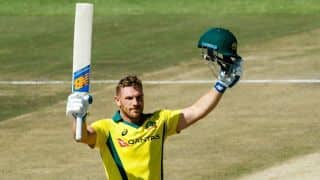