Sachin Tendulkar on Friday arrived at Wimbledon 2017, where he will be supporting Roger Federer in his semi-final clash against Tomas Berdych.

Sachin Tendulkar arrived at London on Friday to watch Wimbledon 2017, where he will be supporting Roger Federer in his semi-final clash against Czech Republic’s Tomas Berdych. Upon his arrival at the venue, Tendulkar said that it has always been special to be in Wimbledon: he has been a great fan of tennis, and nothing can be greater in tennis than watching the sport at Wimbledon. On being asked on who was he rooting for in the semi-final, he promptly said that he has been a big fan of Federer for the past 10 years and will surely be cheering for him. Tendulkar: Federer, Nadal show why they remain a force in world tennis

Tendulkar was also asked on how Federer is both as a sportsperson and tennis player. He replied: “I think as a sportsman and a tennis player he is someone the whole world admires. I know Roger personally and I admire him more as a person. He is such a down-to-earth, humble man. after having so much achieved in life, to be like that it is always nice to be around him.” Roger Federer lifts Australian Open 2017; cricket fraternity celebrates

“I’ve been watching Roger for the last 10 years. Here I am to support Roger.”@sachin_rt is back at #Wimbledon. pic.twitter.com/NBWm7pugfG

Earlier, he saw the epic match only in bits and pieces but Sachin Tendulkar says he could well understand what Federer and Rafael Nadal might have felt during their Australian Open final clash. Federer defeated Nadal in a memorable five-setter last January to end a five-year-old Grand Slam drought and add an 18th Major trophy to his cabinet. 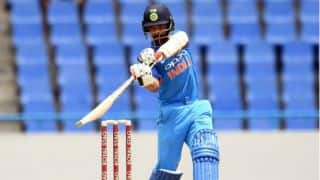