Terming his side's come-from-behind 2-1 series triumph in India "incredible", England skipper Alastair Cook said that the achievement should be treated at par with an Ashes series win in Australia. 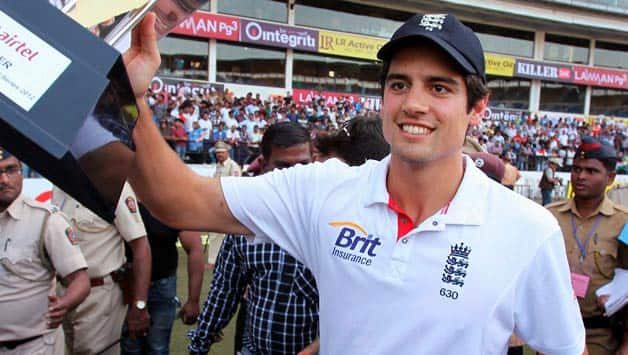 Terming his side’s come-from-behind 2-1 series triumph in India “incredible”, England skipper Alastair Cook said that the achievement should be treated at par with an Ashes series win in Australia.

“It’s been an incredible tour and to keep India out and how convincingly we batted out the day… obviously nervous over the last 140 overs knowing how close we were to doing something really special. To eventually go out and do it as convincingly as we did was incredible,” Cook said.

England wrapped up the four-match series after the final Test ended in a draw at Nagpur, giving the visitors their first win on Indian soil since 1984-85.

“It’s at par with winning in Australia. As an Englishman, winning in Australia meant a huge amount, but here the dressing room, especially in the last half hour so, knowing what we had achieved, was a very special place to be in. It will stay in my memory. I’m going to enjoy it tonight.

“I can’t praise the guys enough. The whole squad has played its part and everyone has contributed. I can’t praise their effort and willingness to learn enough. It was a very tough challenge,” said the English skipper who walked away with the Man-of-the-Series award for scoring a phenomenal 562 runs with three back-to-back centuries.

Cook said the turnaround was their second-innings batting effort at Ahmedabad.

“I was not surprised with the way we stood together but at the level that we achieved. After Ahmedabad, I did talk about playing to our potential but to do it straightaway and put all those doubts to bed was a good thing and after that second innings, we knew we could score runs here.”

He was referring to the way England — following on behind India’s huge score of 526 after being rolled over for 191 in the first innings — responded by making 406.

“It helped that we were playing on a wicket that we knew would have a result because it was turning so big. That took the pressure off us. We knew no one was expecting us to win apart from ourselves,” he said about the victory in the second Test at Mumbai, which levelled the rubber at 1-1.

“Of course theres doubt, there’s always doubt. Especially halfway through day two in Mumbai when we were getting rolled a bit but as I said before, if we could play close to our potential as a side we had a chance of winning the game. And we did that. And we followed it up in another game in Kolkata,” Cook said.

“And in this game, we continued with that form. It was about translating what we had been practising and planning out in the middle and trusting our abilities with the bat and the lads really stood up in these three games. The bowling attack we have has proven itself over a number of years. Monty (Panesar) coming in was fantastic.

“Jimmy (Anderson) was outstanding with the reverse swinging ball. Swanny was great, the highest wicket-taker in the series. Those three guys were fantastic,” he gushed.

He conceded that it was a mistake to leave out left-arm spinner Panesar in Ahmedabad.

“We are very lucky that we have two spinners who are up there among the best in the world. Monty and Swanny have been outstanding. Clearly we got it wrong in Ahmedabad when we didn’t play Monty but when we put that right, he was outstanding. But credit also to the way we batted against their spinners.”

He lauded the efforts of Jonathan Trott and Ian Bell for their excellent centuries, which dashed India’s slim hopes of clinching a series-levelling win.

“The way Trott and Bell batted today was a calming influence,” he said.