New Zealand have been scrappy and even ruled out already by many, but India won't make the mistake of taking them lightly.

MANCHESTER: It just had to happen, didn’t it? A cracker of a contest which could not take place in the round-robin stage of the World Cup due to rain, is finally happening. The moment Nathan Lyon holed out to Andile Phehlukwayo in the deep in the final league match of the World Cup 2019, India’s date with New Zealand was guaranteed. Only this time, there’s a lot more riding – with a World Cup final at Lord’s beckoning. The game has been billed as the World No. 1 ranked India taking on the ever-consistent New Zealand.

But is that even true? ALSO READ: India’s bossing of league stage a stern warning for New Zealand

From remaining unbeaten in the first six matches, New Zealand’s World Cup campaign has kind of skidded off the road following a hat-trick of losses against Pakistan, Australia and England. Some feel New Zealand don’t even deserve to be in the final – they only made it when Bangladesh scored an eighth run against Pakistan. But what matters is that New Zealand are here, with a hope of having pressed the reset button which Kane Williamson emphasised on after the loss to England.

Standing in front of them is India – a side that has bossed the league stage. Do India have the upper hand? Most certainly. But can New Zealand prove Ian Chappell and many other like him wrong? Most definitely.

Overall, New Zealand lead India 4-3 in World Cup matches. They had also beaten India in the final of the 2000 Champions Trophy and the league game of the 2016 World T20. In the last three World Cups, India have lost just three matches. It is quite something. But New Zealand are in the final four for a reason too. Trent Boult has troubled India’s top order with his left-arm pace. Lockie Ferguson is expected to be back and Mitchell Santner, as per Virat Kohli, adds a variety to their attack.

Having said that, Williamson and Ross Taylor firing in bits and pieces, the rest of the New Zealand bats have gone cold. Except Afghanistan, New Zealand is the only team in the tournament who don’t have a 300 in the tournament and between their No. 4 and No. 7, the highest score is 95. They have an opening conundrum to address. Martin Guptill has hot just one fifty whereas Colin Munro and Henry Nicholls have combined to score 133 runs from eight innings. Against a bowling attack like India, New Zealand’s batsmen face a daunting task.

It wasn’t too long ago that the two sides had met in a five-match series, in which India beat New Zealand comprehensively on their soil after a 10-year long gap. And this was when Kohli had left the series after three games, by the time India had already ensured that the series was theirs. No better opportunity for New Zealand to land a timely blow, get revenge and seal a passage to a second straight World Cup final.

Dinesh Karthik’s extended session in the nets could mean that he retains his place in the team and Kedar Jadhav waits out. Earlier this year, India’s wristspin pair of Yuzvendra Chahal and Kuldeep Yadav had a lot of success against New Zealand but given the pasting they received at the hands of England’s batsmen, India might stick Ravindra Jadeja partnering one of them – mostly likely Chahal. If India go ahead with Jadeja and Chahal, it leaves them room for either Mohammed Shami or Bhuvneshwar to open the bowling with Jasprit Bumrah. Considering Bhuvneshwar’s struggle against Sri Lanka, chances of Shami replacing him seem strong.

Tom Latham’s half-century against England could seem him go up with Martin Guptill, which means Nicholls can slot in somewhere in the middle order. As for Colin Munro, with Bumrah’s high success ration against him, the left hander could might as well continue warming the bench. Ferguson bowled with full steam and is set to take back his place in the XI replacing Tim Southee

– India’s top three has a mind-blowing average of 93.94 this World Cup

– The Rohit-Rahul partnership has put together 634 runs in the tournament at an average of 90.57

“I have understood that roles can vary a lot in one-day cricket, depending on the time you step into bat, and I have been very happy with holding one end and letting guys express themselves striking at 150, 160 or 200 [and] if the team needs, I can accelerate in the end.” – Virat Kohli doesn’t mind getting a century this World Cup as long as the other batsmen are making it count. 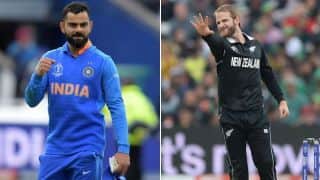