In India, the craze for a major cricket match when the men in blue take the field is well known.

Mysuru: If women’s cricket matches get as much visibility on television and media coverage as the men’s matches do, it will be game-changing as the masses will get to know what the girls can do, says India women’s team’s star all-rounder Harmanpreet Kaur. In India, the craze for a major cricket match when the men in blue take the field is well known. People take a holiday from work, or station themselves at restaurants with huge screens to catch the action. But the case has not been the same when it comes to women cricketers.

However, the 2017 Women’s Cricket World Cup in July changed the scenario. “After the World Cup, things have changed, and the reason was that most of the matches were telecast. If we get more matches on television, I think people will get to know what exactly we are doing. Before the World Cup, we won a lot of tournaments but that time the matches were not shown on the TV as such. So no one knew what we were doing,” Harmanpreet told IANS on the sidelines of Crocs Mysore Fashion Week 2017 where she walked the ramp.

“After we won the World Cup, a lot of people have been asking me, ‘When is your IPL, BBL, etc’. So people now actually want to see women’s cricket and that is a big achievement for us,” added the vice-captain of the India team. The Indian team finished runners-up at the Women’s Cricket World Cup this year, with England winning by just nine runs. Just a month earlier, the national men’s team had lost to Pakistan in the final of the ICC Champions Trophy by 180 runs.

Talking further about the changes that have come about in recent years, Harmanpreet shared that fitness, a key ingredient to win or rather play any match, was ignored earlier. But over the past two years, the women in the team have become more conscious. “In the last two years, we have improved a lot. Earlier, we had fitness issues. Nowadays, the girls are more professional and they know what to do and what not to do. Everyone is focused on their fitness. Skill-wise, nobody can beat us. We have got the best skills — be it batting or bowling.

“The only thing was we were lacking in fielding and fitness. But now we are working on it… I think in another one or two years, we will match the fitness level of international teams like Australia,” she added. Since the World Cup, how has the attitude of the authorities changed towards the women’s cricket team?

“Nowadays, we are getting male coaches. I think male coaches have a lot of experience here… With that, we get confidence and experience. I think now that Board of Control for Cricket in India (BCCI) is doing things for us, we will be able to improve our game more.

“Hopefully we will be getting some more batting coach and fielding coach now. We can learn from them,” said the 28-year-old. 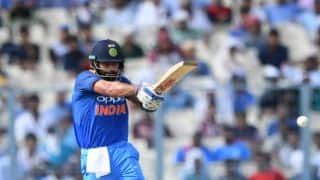