Australia ended day two at New Road on 92/1, a lead of 157 runs over Worcestershire.

Test hopeful Marcus Harris scored an unbeaten fifty while Josh Hazlewood took three wickets on day two of Australia‘s tour match with Worcestershire at New Road, ahead of what is expected to be a very wet Friday.

Harris, who opened in Tests for Australia while Cameron Bancroft was serving his ball-tampering ban, lost out to the recalled batsman for the first Ashes Test at Edgbaston last week. Given a chance to press his claims for a Test recall in the three-day tour game, Harris batted his way to 72 not out off 78 balls by stumps with Australia 92/1, a lead of 157 over Worcestershire.

The forecast for Worcester is heavy rain on Friday, which decreases the chances of play resuming.

Earlier, Hazlewood (3/34) and Mitchell Starc (2/56) impressed for Australia as Worcestershire – languishing at second from last in division two of the County Championship – were kept to 201/9 declared. Michael Neser and Marnus Labuschagne took two wickets each.

When Australia batted again, Bancroft fell for 7 off 40 balls. He scored 33 off 78 balls in the first innings and then missed two catches in the slips cordon during Worcestershire’s innings. Still, Bancroft is expected to keep his place alongside David Warner for the second Ashes Test starting August 14 at Lord’s.

Warner is among the players rested for this match, having scored 2 and 8 in his first Test in 15 months. Warner was dismissed by Stuart Broad both times at Edgbaston in what is his worst personal contribution in an Ashes Test. 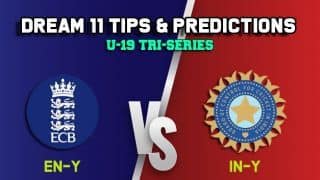 Dream11 Team England U19 vs India U19, Match 12, U-19 Tri-series – Cricket Prediction Tips For Today’s match EN-Y vs IN-Y at Beckenham 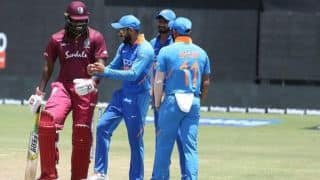