The ICC president N Srinivasan meanwhile has confirmed on the eve of the World Cup 2015 final, that the next World Cup will be a 10 team affair.

A online petition has been submitted to International Cricket Council (ICC) by Cricket fans to change the idea of limiting the ICC Cricket World Cup 2019 to 10 teams. The ICC president N Srinivasan meanwhile has confirmed on the eve of the ICC Cricket World Cup 2015 final, that the next World Cup will be a 10 team affair. The decision will definitely discouraged the Associate members of ICC, who will now have to fight against the full members to get a chance to play in the biggest cricketing event of the World. Australia win the World Cup 2015: Twitter reactions

“Today, I submitted the petition to the ICC. As far as the next steps go, I understand that a final decision on the formats of the 2019 and 2023 Cricket World Cups will be taken at an ICC board meeting in early April. Between now and then, anything we do to raise awareness of the issue could make the difference between a fair and an unfair World Cup format.

It would be an endless task to recall the names of all the influential figures and former cricketing greats who have voiced their opposition to the reduction of the World Cup. Many have shared, even signed, this petition. To them, this campaign owes a great deal.

But most of all, this petition would not have gone anywhere without the thousands of you, giving your time and attention to signing it and passing it on. Many of you even added passionate, moving, and occasionally funny comments, outlining your reasons for supporting the cause; I have read every single one, and they have also been submitted to the ICC. Thanks to you, the petition has attracted the attention of international media outlets, and reached cricket fans in every corner of the globe.

We all hope that the ICC will reverse their decision to reduce the World Cup to ten teams from 2019. It would be the right thing to do from both a cricketing and financial perspective. If they do not, it would be a great tragedy for cricket.

However, it would not be the end: there is always the possibility that in the future, the World Cup will be enlarged again, and some of the damage could be reversed. This must be the goal we work towards, even if the ICC makes the wrong decision in April.

The appetite and passion for cricket beyond the Test world is immense, and will not go away overnight. Please, continue to support the cause of the associate nations when the memories of this World Cup have faded; that is when they need your support the most.

Thank you for signing the petition, and thank you for your support, both now and in the future.

You can also support the petition here 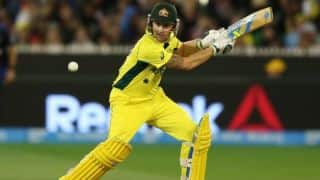 Brendon McCullum: We walk away with our heads held high, I am sure everyone will be proud of what we have been able to achieve