There will be no time for reminiscing about the achievements of Eoin Morgan's side as Silverwood wants his team fully focused on the task at hand.

Chris Silverwood says England’s historic World Cup triumph against New Zealand will count for nothing when the two sides clash again. England won the World Cup for the first time after beating New Zealand in a dramatic Super Over at the end of an improbable final at Lord’s in July.

England are off to New Zealand for a five-match Twenty20 tournament. But there will be no time for reminiscing about the achievements of Eoin Morgan’s side as new England coach Silverwood wants his team fully focused on the task at hand.

“I’m sure there will be a few conversations but we are here to focus on the series in front of us,” Silverwood said. “We have moved on now. Obviously, it was a fantastic game of cricket to be involved in at any level really, it was a real delight of an experience but we have got to move on. Obviously, there is a different series in front of us now and we have got to concentrate on that.”

Joe Root, Ben Stokes and Jos Buttler have not travelled for the series in New Zealand after a draining international summer. But Silverwood, who has stepped up from England’s backroom staff to replace Trevor Bayliss, wants the replacement players to show their potential.

“One or two of them are having a break but it will be business as usual from a one-day point of view and with the T20s, Eoin Morgan has got a really strong hold on what he wants to do with the team and it is my job to back him up and put those things in place.”

England Test captain Root has gone back to basics in a bid to rediscover his best form with the bat, linking up with a friend from boyhood club Sheffield Collegiate for informal coaching sessions. Root will return to lead the red-ball side against the Black Caps and he has been using his time to tinker with his game, having managed only one Test century in 18 innings in 2019.

“I’ve done three sessions and used the head coach at Sheffield Collegiate. He’s called Josh Varley and he’s younger than me,” Root said. “From the age of 12 or 13 we’ve thrown balls at each other, all day every day down at Abbeydale. We’ve been doing a bit of work together, not much technical stuff but he’s been doing a lot of flinging.

“I wanted to work on a few things so it’s been good to get back into it. I want to start the winter with a bang and set a marker in terms of making big scores and leading from the front.” 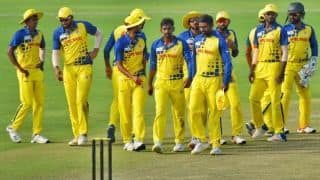