Hardik Pandya has been in remarkable form this IPL and his Mumbai Indians teammate Yuvraj Singh hopes that he carries it to the World Cup.

Yuvraj Singh, hero of India’s victorious campaign in the 2011 World Cup, is expecting “special performances” from allrounder Hardik Pandya in the 2019 edition, beginning May 30 in the UK.

Pandya is back to his best, at least with the bat, following testing times which saw him serve an interim suspension for making sexist comments on a popular chat show.

The 25-year-old has been in remarkable form this IPL and his Mumbai Indians teammate Yuvraj hopes that he extends his explosive run to the 50-over mega event.

“I was actually having this conversation with him (Hardik) yesterday where I told him that ‘you have a great chance of performing really well with the ball and bat’, the kind of form he is in at the moment.

“Definitely, the way he is batting at the moment, it is phenomenal and I hope he carries that form (into the World Cup). He has been bowling well in patches but as I said it is all about how you handle the pressure,” said Yuvraj.

Pandya has been in the form of his life and Yuvraj said that his 91 against the Kolkata Knight Riders was the best IPL innings he has seen.

“It is probably the best shape as a batsman to get in. I have been watching since the practice games, he was hitting the ball really well. I had told him ‘it is going to be a special tournament for you, the way you are hitting the ball’,” said the southpaw.

“Over the years, as an experienced player you know if someone is hitting the ball well, he is in great shape. He got 91 from 34 balls against KKR, probably that is the best innings I have seen in the IPL just because he hit four quality bowlers he was batting against.

“When you are doing that, you know that someone is batting very well,” added Yuvraj, who is known for hitting six sixes in the 2007 edition of WorldT20 in South Africa.

Chief selector MSK Prasad, during the World Cup squad announcement, stated that Vijay Shankar would bat at number 4. But there is still no clarity about who will bat at four and asked about it, Yuvraj gave a guarded reply.

“That question you need to ask the selectors, not me. All I can say is that No 4 is a very important position and I am sure they have selected the team thinking about the whole competition. We have to find who is batting at No 4, I am sure there are a couple of options, we just have to wait and watch

“The thing for me is that when you go back you need experience for whatever number you are batting. All five positions are very important. The conditions are going to be different, so I think it’s how you manage yourself under pressure. You will be put under pressure because the best teams in the world are playing. How the guys handle pressure in crunch situations is actually going to show the character of the team.”

When asked whether the likes of Ricky Ponting be allowed to coach in the IPL as it could expose Indian players in a World Cup while someone like a Sanjay Bangar, who is the Indian team’s assistant coach, was not allowed to be part of the Kings XI Punjab set up due to conflict of interest, Yuvraj did not say much.

“I am not in the Board. You are asking me an administrative question. My opinion is, first of all, it is not my call. I cannot not be saying who should coach or not. I think Ricky Ponting is a legend. It is great for young guys to benefit from him. You learn so much.

“If Sanjay has worked with the Indian team for such a long time. He has got great work ethics. I am actually not in a position to say, who should be coaching where and who should be not coaching where. It is a great opportunity for everyone to learn with people who have experience,” said Yuvraj. 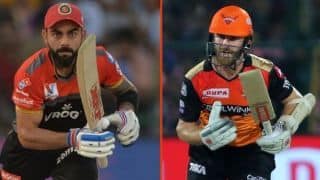