The injured India allrounder stated that his rehabilitation was on track but that he could not identify a date for his return.

Hardik Pandya, the India allrounder, has descried the 2019 ICC Cricket World Cup as his biggest goal as he targets a comeback to the team after being sidelined with a back injury during the Asia Cup last month.

In an interview with The Times of India, Pandya – who is not part of the ongoing home series versus West Indies – stated that his rehabilitation was on track but that he could not identify a date for his return.

My recovery is on track. I’ve been busy with my fitness sessions and physiotherapy. I don’t know when (I’ll return to action), but right now I’m only focusing on getting fully fit, said the 25-year-old. It was disappointing to get injured like that. You can’t control these things. Now I’ve got the time to get fitter and stronger. I always take things positively. This injury was a blessing in disguise. I got time off from cricket. After this, I won’t get much time off.

For Pandya, who has played 42 ODIs since making his debut three years ago, next summer s World Cup in England was the target.

My individual, and the team goal, right now is getting the World Cup back. It’s my biggest goal, he said. I want to give more than 100% to make sure that we win the World Cup. That’s why right now, I’m focusing on improving my skills, fitness, mentally I want to get stronger. Because that 10-15% (extra) would be very critical. I’ll give 100%, but if I can give 10-15% more to my game, then it would give me great comfort, and I’d be able to do a lot of things which I’m not able to do now.

During the tour of England, Pandya found his title as a Test allrounder questioned by Sunil Gavaskar and Michael Holding, after two average matches. In the third Test, Pandya claimed 5/28 in a match-winning spell as India beat England at Trent Bridge, and then, when asked if he had done enough to keep critics at bay, replied that his focus was just on being himself.

Reminded of the statements by Gavaskar and Holding, Pandya said: Why would it hurt? They’ve played so much cricket. Let them say it. It’s OK. I’ve heard them so much. I respect that. I’m worthy enough that they’re talking about me. If I wasn’t, they wouldn’t have said anything about me. I take it in a positive way.

Asked if he was aware of speculation that he will be rested from India s Test tour of Australia next month, Pandya said he was not aware of such plans. I m not thinking about anything. It’s completely the management’s call, he said. That’s how I’ve played my cricket till now. I do whatever they (captain and the coach) and my team require me to do. If they want me to play any particular format, I’m OK. If they want me to play all three (formats), I’m completely fine. I still have faith in myself, in the team, and they’re happy with me.

Pandya credited Virat Kohli s role as an influence on his career. He’s been a great support. He’s helped me improve my game, which is a fantastic quality in him. Till now, I’ve grown with him. My career started under MS [Dhoni], then Virat took over. I’ve improved under both of them, he said. 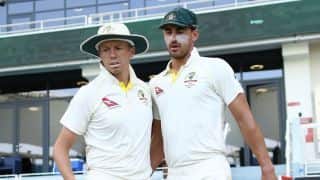