England beat New Zealand in a stunning finale at Lord’s on Sunday after the scores were tied at the end of the regulation overs. A Super Over followed which also yielded the same result but England won on boundary counts.

“I don’t think I’m alone in saying that it’s probably the greatest cricket match ever, and for that to be the World Cup final was incredible,” Curran was quoted as saying by ESPNCricinfo on Thursday. “That will provide a buzz for everyone across English cricket going into the Ashes, which is the biggest series an England player can be involved in in Tests, and this match against Ireland. Days like Sunday get everyone, whether they were involved or not, more excited and desperate to do well so I’m sure it will rub off as we head into the Test part of the summer.”

“The first aim for the World Cup guys was to win that, and they’ve achieved that. But there’s another big test coming up, and the Ashes are the biggest thing you can play in as an England cricketer, that’s what I’ve always felt. Hopefully we can be lifting the Urn at the Oval in September. We have to take one game at a time and try to contribute as much as you can.”

Curran, who wasn’t picked for the world cup squad, has made it to the England Test squad for the first ever four-day Test against Ireland that starts from July 24.

Curran has had a memorable start to his Test career. Against India last year, he made his debut and ended up with the man-of-the-series award as England clinched the five-match series 4-1. He then also impressed on the tour of Sri Lanka and Indian Premier League as well. However, a hamstring injury did affect his County stint with Surrey but he has recovered from it and has made a successful return.

“I feel really good going into the Ireland game,” he said. “It’s been quite a frustrating season really, I came back from the IPL, played my first Champo game and got injured, had a couple of weeks out. I’ve come back and felt good, putting in some decent performances with bat and ball. Confidence is really good, it’s just trying to contribute as much as I can. Hopefully I’m in the XI on Wednesday and I can put in a performance.

He added, “Performing against India last summer has given me quite a lot of confidence. It’s a new challenge, a new summer. I can’t rely on that, I need to look ahead and find performances that will beat the Australians in the Ashes. The team is pretty exciting, there will be some great cricket played. I’m really excited to see what this summer holds.” 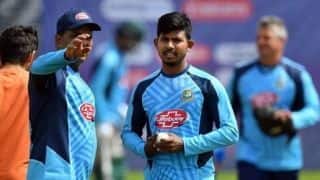