Would be Great to See Sourav Ganguly Getting Into ICC Chief's Role, Says Graeme Smith

Would be Great to See Sourav Ganguly Getting Into ICC Chief's Role, Says Graeme Smith

Smith feels it would be great to see an ex-cricketer taking over the top job. He also feels that it will be good for the game. Backing the Board of Control of Cricket in India (BCCI) president Sourav Ganguly to take over from International Cricket Council president Shashank Manohar as the chief, former South African skipper Graeme Smith feels it would be great to see an ex-cricketer taking over the top job. He also feels that it will be good for the game.

“From our perspective, it would be great to see a cricket man like Sourav Ganguly may be getting into the President’s role of the ICC,” Smith told reporters. “I think that will be good for the game; I think it will be good for the modern game as well. He understands it; he has played it at the highest level; he is respected, and his leadership will be key to us going forward,” the former South Africa skipper said.

Smith said that the BCCI president’s knowledge and awareness of the needs of the modern game is something that will be a plus for him to lead at the ICC.

“I think leadership in our sport going forward is going to be key and I think having someone at a level that understands the modern game and the challenges we are going to face going forward emphasises more the people that get put into key positions,” Smith said.

“Having dealt with Sourav for a long time, I think that the President of the ICC now becomes a very key position going forward in terms of how the game can progress at the right level.”

Ganguly’s term as BCCI president ends in June as per the board”s new constitution. “So I think that is going to be an interesting time going forward in international cricket and I think that will be a great appointment,” Smith said.

CSA Chief executive Jacques Faul said: “I think India must play a leadership role when it comes to the Future Tours Programme and a responsible one. Our engagement with Sourav has been very positive in his willingness to help us. We have also checked this with the leadership of CSA. We would support an Indian candidate at this stage. But we have also got to maybe look at the integrity of the whole process.

“I don’t think there are any nominations out there of any candidates that I know of, so they are still in the process, but from a CSA point of view, we have no problem supporting any Indian candidate. But to be fair, we’ve got look at who has been nominated and bring it back to our board and get a mandate for it.” 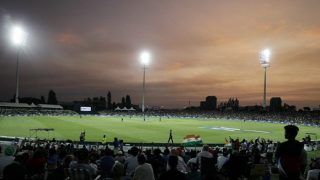