Would like every player to play for country first: Sports Minister

Would like every player to play for country first: Sports Minister 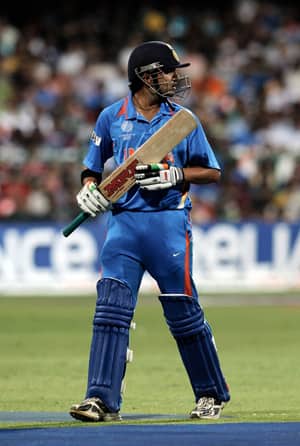 Although he tried to evade a direct reply when asked about Gambhir’s decision to play for his IPL franchise Kolkata Knight Riders despite a shoulder injury, which eventually ruled him out for the entire tour of West Indies, Maken hinted that for any sportsperson country should come first.

“I would like to keep myself out of this controversy but as a minister I would like everyone to play for the country first,” Maken said.

Gambhir has stirred the country versus club debate when he captained Kolkata Knight Riders against Mumbai Indians in the IPL eliminator on Wednesday despite suffering from a chronic shoulder injury.

The incident took an ugly turn a day later when KKR physio Andrew Leipus, in his report to BCCI, stated that the left-hander needs complete rest for four to six weeks to recover from injury.

Subsequently, he was on Friday ruled out for the entire tour of the West Indies and in his place Suresh Raina has been named captain while Harbhajan Singh will be his deputy.

If the shoulder injury was not enough, Gambhir courted another controversy when Leipus, in his report to BCCI, stated that the player had used “corticosteroid injections” earlier for his recurring shoulder injury.

Interestingly, the corticosteroid injection is under banned drugs list of World Anti-Doping Agency (WADA) and a sportsperson needs to get Therapeutic Usage Exemption Certificate (TUEC) from National Anti-Doping Agency (NADA) or WADA in order to use the drug, which Gambhir did not take.

When asked about Gambhir’s reported use of the banned substance to cure his shoulder, the Sports Minister said, “The National Sports Development Bill will make it legally binding for all to follow NADA and WADA rules.

“So, we want the bill to pass as soon as possible. But BCCI is not a recognised National Sports Federation so they don’t come under us. But we have mentioned cricket also in the bill.”

Maken, who inaugurated the gymnastics camp under the Come and Play Scheme at the Indira Gandhi Stadium, also said that so far they have received overwhelming reponse for the initiative, which gives general public access to the world class stadia built during the Commonwealth Games.

“Two months ago we have launched this scheme and so far we have got good response, Around 10,000 to 12,000 children have already registered under this scheme,” he said.

“Our focus is on other sports than cricket. So, we want to use the infrastructure as far as possible which is our first step. Our second step is to make centre of excellence in the stadiums and third step is to host international events,” the Minister insisted.

Factors that contributed to the decline and fall of Mumbai Indians