Royal Challengers Bangalore have set up target of 176 for Kings XI Punjab in Match 39 of IPL 2016 at Mohali.

Kings XI Punjab (KXIP) are chasing target of 176 set up by Royal Challengers Bangalore (RCB) in Match 39 of IPL 2016 at Mohali. Just when KXIP were picking up pace in the game, they lost two consecutive wickets in the 11th over bowled by Yuzvendra Chahal. Firstly it was Saha stumped by keeper KL Rahul dismissing him for 16 while David Miller entered at No.4 and was knocked off for a duck, thanks to the presence of mind by the keeper Rahul once again and Chahal was all over the place with all joy getting his 2nd wicket in the same over. But there was something to cheer for KXIP with their skipper Murali Vijay securing yet another half-century from 36 deliveries including 5-fours and a six. Vijay looks to be in a commanding position. LIVE CRICKET SCORECARD: Kings XI Punjab vs Royal Challengers Bangalore, IPL 2016 at Mohali

Marcus Stoinis is the new man on the crease now along with skipper Vijay. Now KXIP are playing at 114 for 3 in 14 overs. Earlier, RCB lost early wickets in quick succession, although their opening pair Virat Kohli and KL Rahul gave flying start of 63-runs stand. But with KC Cariappa coming into attack, he secured two wickets in the same over of Kohli and Rahul. Soon it was Shane Watson dismissed too soon for 1. It was AB de Villiers 360 degree performance that lead RCB to 175 from 6. KXIP won the toss and elected to field.

RCB will want to win every match now to secure place in the playoffs. As for KXIP, they will to move ahead in the points table after being at extreme end of the table for a while. 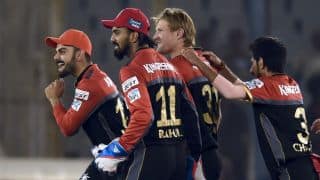