Kings XI Punjab were 39 for two after four overs, chasing 163 to win against Rajasthan Royals in their IPL 2015 match.

Kings XI Punjab were 39 for two after four overs, chasing 163 to win against Rajasthan Royals in their IPL 2015 match at Maharashtra Cricket Association Stadium in Pune on Friday. Punjab need 124 more runs to win from 16 overs.

Murali Vijay looked to play attacking strokes as he smashed 10 runs off Chris Morris’ opening over in the game. The second ball was hit in the over the covers and the second last ball was picked up well and smashed over the midwicket for a six.  Kings XI Punjab vs Rajasthan Royals Live Cricket Score IPL 2015: Match 3 at Pune

Vijay then opened Tim Southee’s second over with a four past the man at mid on. But in the same over, a horrendous running between the wickets resulted in Wriddhiman Saha’s wicket. Southeee delivered one wide, which Sanju Samson dived on his left to stop. Saha, the man on strike, set off for a run but then realised there was none. Live Cricket Updates: Kings XI Punjab vs Rajasthan Royals in IPL 2015

A direct hit from Samson behind the wickets ended Saha’s crease, who went back to the hut after facing four balls and scoring seven runs. The first wicket which fell in the KXIP’s innings was of Virender Sehwag, who was caught behind first ball.

Rajasthan Royals (RR) crawled to a respectable total of 162 for seven in their allotted 20 overs, against Kings XI Punjab (KXIP) in their opening match of the Indian Premier League (IPL) 2015 tournament’s third match, at the Maharashtra Cricket Association Ground in Pune on Friday. It was largely due to James Faulkner‘s late blitz that Rajasthan were able to set a target in excess of 150, especially after they were reduced to 75 for five at one stage. 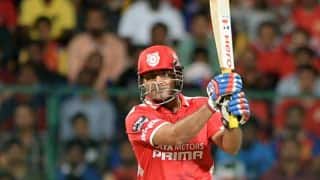 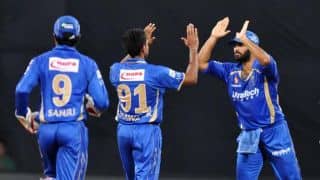