Wriddhiman Saha retired hurt with a hamstring strain, but is likely to keep wickets later.

Wriddhiman Saha has retired hurt during the second Test between India and Sri Lanka at Colombo. He was discomforted by a hamstring strain but reports suggest that it is just a minor niggle he is suffering and will return to keep wickets when India take the field. India can make do without his batting services as they are in a commanding position with the lead ballooning towards 400, as they go to tea, with Stuart Binny and Ravichandran Ashwin at the crease. ALSO READ: Ajinkya Rahane scores 4th Test century in India vs Sri Lanka 2015, 2nd Test at Colombo

India will look to declare soon after tea so as to give themselves sufficient time to try and bowl out Sri Lanka in order to level the series. Ajinkya Rahane was the star of the day, scoring a marvellous hundred in slightly tricky conditions. Murali Vijay also batted very well and ideally should have gotten his century but he fell for 82 to Tharindu Kaushal. Live cricket updates India vs Sri Lanka 2015, 2nd Test at Colombo, Day 4

Kaushal has been the pick of the bowlers and has been responsible for all four Indian wickets on Day Four. As usual, he has been a tad expensive but has made breakthrough, however, the other Sri Lankans have not looked very threatening. As a result the upper hand is clearly with India at the moment, Sri Lanka will need a spectacular effort with the bat when they are put in. 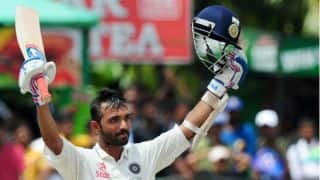