It is learnt that Saha will have to undergo a surgery in the UK next month and that might rule him out of the tour of Australia later this year.

KOLKATA: Believed to be a minor thumb injury till now, Indian wicketkeeper-batsman Wriddhiman Saha is actually nursing a career-threatening shoulder problem caused by a “bungled” rehabilitation programme at the National Cricket Academy, a top BCCI official has claimed.

It is learnt that Saha will have to undergo a surgery in the UK next month and that might rule him out of the tour of Australia later this year.

“Wriddhiman’s rehabilitation has been a complete goof up. The NCA physio has bungled it big time. Now only a surgery can put him back on track. Once he is done with surgery, he will not touch the bat for at least two months and then rehab will start,” a senior BCCI official told PTI today.

Saha has been out of action, citing a thumb injury sustained during this year’s IPL, but it has now come to light that the problem is much bigger than what was initially assessed.

He was not picked for the upcoming Test series against England but the Board did not reveal the full extent of his fitness problems. A shoulder surgery would effectively mean that he will also miss India’s tour of Australia.

Saha, on his Twitter page, had recently posted that he was “going through a bad phase” but expects to come back strong.

The BCCI official admitted that the 33-year-old Bengal stumper had long recovered from thumb fracture sustained during IPL.

“Wriddhi first sustained a shoulder injury during the tour of South Africa while taking a catch. But it was a niggle that didn’t bother him. He left SA tour because of hamstring trouble and not shoulder pain though,” the official claimed.

“Now since keepers don’t need to throw from deep, so during IPL, Wriddhi didn’t bother and played with that injury. But the pain didn’t go away.

“He thought that possibly he could play against England with a good rehab at NCA and take it from there. But at NCA, training under a senior physio aggravated it further,” he alleged.

The question that is being asked is whether the physio, a former support staff with the Indian team, had given a report about the actual extent of Saha’s injury.

Even convenor of selection committee Amitabh Chaudhary (acting secretary) wasn’t informed either by the NCA or selectors about Saha’s actual injury.

“Isn’t it weird that a hairline fracture was taking two months to heal? No one probed the actual reason. Now he requires a major surgery and we can’t put a date on his comeback,” the official said. 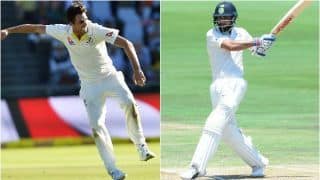