New Zealand will be better prepared than India.

New Zealand’s leg-spinner Ish Sodhi has stated India is at the peak of its powers but the Kiwis have the firepower to create history. Kane Williamson’s team has been consistent in the recent past but they haven’t able to cross the last hurdles in the big events. New Zealand is the runners-up of two previous editions of the World Cup.

On the other hand, India last won a major ICC title back in 2013 when MS Dhoni-led the team to glory in England. Since then, a big trophy has eluded the Indian team. Thus, both teams will look to bring their best to the table to end their trophy drought.

Sodhi added that winning the World Test Championship will be a historic moment for New Zealand.

Ish Sodhi said while talking to Grade Cricketer, “Yeah, totally (it will be a massive moment in New Zealand cricket). It will be so satisfying. We have had so much success in series’ in recent times and our winning percentage over the last few years has been really good. But we haven’t quite been able to jump that hurdle of winning the ‘world’ tournament. And this one is so prestigious. Going to the UK and playing at a neutral venue against such a great Indian side.

“The Indian team has actually gone to Australia and won the last two series’ there in Test cricket. They are at the peak of their powers as well. It will be a great challenge I think. And if we do go over there and win, it will go down in New Zealand cricket history (as one of the greatest wins ever). We have got the personnel to do it.”

On the other hand, Sodhi believes that the depth in New Zealand cricket is the reason for their continuous success at the top level. New Zealand has been delivering the goods in all three formats. Meanwhile, Devon Conway had a dream start to his Test career as he scored a double century on his debut at the iconic Lord’s, which goes to show the depth of New Zealand cricket.

“We keep harping on about the depth in New Zealand cricket at the moment and how many guys come in straight into the team and perform. Devon Conway hadn’t played Test cricket before. It was not like he was playing against an average team. He had two of the most prolific bowlers in Test cricket bowling at him. First day at Lord’s, probably his first game at Lord’s, pressure’s high. He comes in and scores a hundred (200). He is another one of a lot of guys who come in and keep performing straightaway. That depth is playing a big part in why we are continuing to have the success that we have.”

The WTC final will be played at the Ageas Bowl, Southampton from June 18. 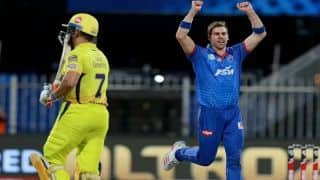