Half-centuries by under-fire veteran Ricky Ponting and debutant Ed Cowan helped Australia reach 170 for three at tea, against India on the opening day of the first cricket Test being played at the MCG. 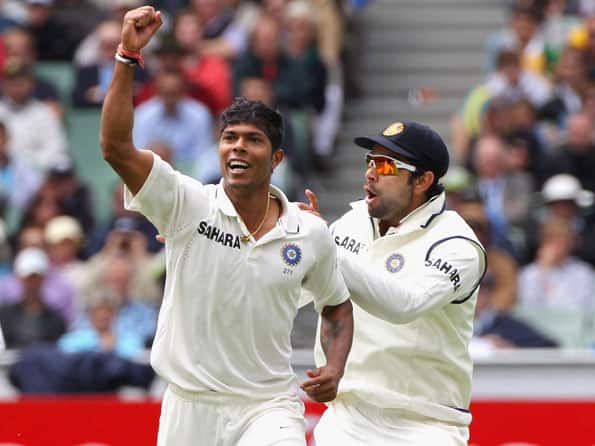 Half-centuries by under-fire veteran Ricky Ponting and debutant Ed Cowan helped Australia reach 170 for three at tea, against India on the opening day of the first cricket Test being played at the MCG.

The duo of Cowan and Ponting added 113 runs for the third wicket before the former Australian captain was dismissed by a beautiful delivery from the young Umesh Yadav.

The ball kicked up from short of good length and Ponting only managed to edge it to VVS Laxman standing at third slip.

Ponting, who had been struggling form, made 62 off 94 deliveries studded with six boundaries.

Debutant Cowan showed enormous patience as he was batting on 58 off 149 deliveries in company of skipper Michael Clarke (7).

Umesh Yadav was the pick of the Indian bowlers as he got all three wickets having removed opener David Warner (37) and No 3 batsman Shaun Marsh (0) in the first session.

Ponting was the dominant partner in his productive stand with Cowan and brought a near capacity MCG crowd on to its feet with his strokeplay.

Ponting, unbeaten on 15 at lunch, came out firing and reached his half century from 67 balls with six fours.

Cowan, who managed only 14 in the first session, seemed inspired by Ponting and decided to shift gears, completing his half-century in 197 minutes off 120 balls with six fours.

The duo punished Yadav at times as the Vidarbha youngster got carried away by short-pitched stuff and the horizontal bat shot was used to great effect.

Both Ponting and Cowan were off the blocks in a jiffy on resumption as they added 40 runs in less than eight overs after lunch.

Ponting helped off-spinner Ravichandran Ashwin towards leg side in the first over to set the tone of the session and then twice picked Yadav for a pulled and flicked boundary to move into 30s.

Cowan himself was a changed batsman as he took a great helping off the bowling of Yadav. The young bowler was first driven through the covers; then pulled to fence before twice being cut over and between the slip cordon for fours.

Both batsmen were now in their 40s but Ponting was the first one to reach his half century when he went down on his knees to lift Ashwin over the mid-wicket region. A little later it was Cowan’s turn to raise his bat in celebration when he pushed Ishant Sharma on to the off-side for a single.

The century-stand for the third wicket came off 123 balls in 162 minutes.

India reined in the two rampant batsmen in the fourth hour as both Ishant Sharma and Ashwin bowled restrictive lines. Sharma had a good opportunity to get rid of Ponting when he got a ball to jump off a length and it took the shoulder of Ponting’s blade.

The ball lobbed off into the gully region but Kohli was too deep to take advantage of it.

Sharma, in the middle of a great spell, made another delivery to leap at Ponting which all but took the edge of his bat on way to the wicketkeeper. However, it fell on Yadav to take Ponting out of the equation.

With Zaheer Khan looking a shadow of his self, India fell back on defence in the afternoon and the two batsmen didn’t fail to notice it.

Only a steady spell from Ishant Sharma and Ashwin in the fourth hour upset the flow of scoring from the two batsmen.

Cowan though has played a dream innings in his Test debut and his vigil has so far lasted for 238 minutes and 149 balls and he has hit seven fours.

The afternoon session was delayed by 36 minutes because of a steady rain and the match will now go on till 7 pm (1.30 p.m IST) local time. (PTI)