Younis Khan: AB de Villiers might have picked up some technical aspect of my sweep

Younis Khan: AB de Villiers might have picked up some technical aspect of my sweep

I just make sure I get as low as possible (to play the sweep). I don t like the ball to beat me under the bottom of my bat while I am sweeping. So, I always try and sweep it like a broom; I learnt that from Younis Khan, the Pakistani batsman, AB de Villiers had famously credited Younis Khan for perfecting the sweep shot. However, in an interview with ESPNCricinfo, Younis humbly declined teaching the South African genius on how to play this stroke. ALSO READ: Younis Khan donates 10,000-run milestone bat for educational cause

He has not learned it from me. However, as professionals, we observe each other s games. He might have picked up some technical aspect of my sweep and implemented it in his own game. There are things that I have also picked up from AB, said Younis.

Younis retired from international cricket earlier this year alongside Misbah-ul-Haq leaving a huge void in the Pakistani middle-order. Younis, one of Pakistan’s greatest, was one of the finest players of spin bowling and mastered the sweep shot. In the same interview, he shared several insights on the shot.

There are no tips (to play the sweep shot). You have to be brave. If you get out sweeping, the whole world will be after you. I myself got out sweeping in my last innings, that too off a full toss. I hit my 10,000th run with a sweep. I reached my only triple hundred via a reverse-sweep, said the 39-year-old, who amassed 10,099 Test runs at over 52.

Younis scored a triple-ton against Sri Lanka in 2009 and during that series, he became the first man to plunder over 100 runs off spin wizard Muttiah Muralitharan.

A spinner does get upset when he gets swept. It was always easier for me to sweep on a turning wicket since the ball would already have some break and force for me to help it on its way. Coming back to that innings, the pitch was a true batting track which helped. The Sri Lankans had piled up a lot of runs and there was nothing much for the spinners. It was a good track for sweeps. The Karachi outfield was very fast too, so any gap and it was a boundary. We had a young team, while they were playing Mendis and Murali, Younis recalled from his 313 at Karachi during the infamous 2009 tour that came to a premature end due to the attack on the Sri Lankan team bus.

Younis feels as a right-hander it is easier to sweep a left-arm spinner or a leg-spinner as the ball tends to break away.

During the 2006 Pakistan s tour of England, Inzamam-ul-Haq crashed on to the stumps while trying to execute a sweep against Monty Panesar. Younis was the stand-in skipper. He shared an anecdote on how he trapped Kevin Pietersen in the latter s strong zone of sweeping.

As KP walked in, Danish [Kaneria] asked me for a deep square-leg protecting the boundary. I refused and encouraged him to bowl. KP swept him a few times and hit him for a few boundaries. Danish was puzzled and kept asking me for protection. I refused every time as I wanted to draw KP into my game. In Danish’s second over against KP, after he had been hit for a boundary, I told him to bowl a googly. He did and it went through KP s defences and hit the stumps. Danish always took my suggestions and implemented them very well. We had a great connection, Younis recalled.

Spinners don t like being swept but what do they do when batsmen hammer them with the demoralising stroke. Younis has an answer to the bowlers who vie to bowl successfully against these cross batters.

I share this with my coaches, captains and bowlers: whenever you are swept or a batsman plays cross-batted shots against you, stick to bowling stump-to-stump. You have to vary the length and pace, but bowl on the stumps. I was watching the World Cup semi-final between New Zealand and South Africa. Elliot was batting against Steyn. Elliot made room for himself and Steyn bowled wider allowing him to free his arms. He did that twice and, instead of following him, Steyn did the opposite. Against Maxwell, you have to do the same. You have to follow these kinds of batsmen when they make room for themselves. They are looking to free their arms, so don’t fall into the trap of giving them that opportunity, concluded Younis. Reeza Hendricks scores 173, Tabraiz Shamsi picks up 4-for as clinical South Africa A thrash Afghanistan A by 164 runs 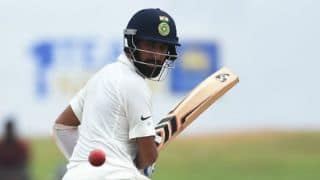 Cheteshwar Pujara: My father has always been my best and worst critic