Younis Khan, during the course of this innings, went past 1,000 runs against Australia.

Pakistan ensured they do not lose any wickets in the final session to end Day Two of the thirdTest at 126 for 2. Pakistan still trail Australia by 412 runs, and have 8 wickets in the bag. Both Azhar Ali and Younis Khan have gone past their fifties. Younis, during the course of this innings, went past 1,000 runs against Australia. Josh Hazlewood was the only wicket-taker for Australia. He removed Sharjeel Khan for 4 and Babar Azam for a duck to leave Pakistan reeling at 6 for 2 at one stage. Pakistan went into tea at 16 for 2, and have batted exceedingly well since then. Azhar and Younis have added 120 for the third wicket, and will look to bat well on Day Three as well.

There was a clear edge that carried to the wicketkeeper when Younis was batting, but the Australians did not appeal. The replays clearly suggested the same. Younis has so far gone on to make the best of this huge let-off. Australia, too, were a bit sloppy on the field, as they missed a couple of run-out chances. David Warner also dropped Azhar at the closing stages of the day to add to Australia s woes.

Australia had earlier declared at 538 for 8. They had as many as three centurions. David Warner, who created history by scoring a ton before lunch on Day One, was eventually dismissed soon after a 95-ball 113. Matt Renshaw was dismissed early on Day Two for 184, his maiden ton. Peter Handscomb was the last of the centurions in this match as he struck a well constructed 110, before being out hit-wicket. This was Handscomb s second Test ton in only his fourth Test.

The batsmen after Handscomb Hilton Cartwright, Matthew Wade and Mitchell Starc added some useful runs to ensure Australia finished well above 500. Australia made a perfect start with the ball as well. Hazlewood got two wickets in an over before tea to put Pakistan under immense pressure. Pakistan still have the likes of Misbah-ul-Haq and Sarfraz Ahmed to follow, but they will want Azhar and Younis to carry on for as long as possible on Day Three.

Australia began Day Two at 365 for 3, after winning the toss and electing to bat. They still have a lot of runs to play with, and will most likely continue to attack. Pakistan have nothing but pride to play for in this match, as they have already lost the three-match series. They lost the first Test at Brisbane by 39 runs and then followed that up with an innings defeat in the second game at Melbourne. They have now lost five Tests in a row. If they lose this match, this will be the first time they would have lost six in a row.

Both teams did make a couple of changes going into this Test. Sharjeel replaced Sami Aslam, and Imran Khan came into the side instead of Sohail Khan. Australia roped in another spinner in Steve O Keefe to partner Nathan Lyon. They also handed a debut to Hilton Cartwright. Nic Maddinson and Jackson Bird miss out as a result. 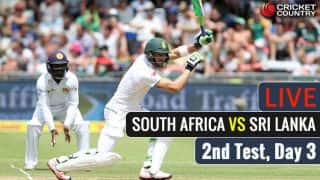