But Moin insisted the selectors had no personal agenda with Younis.

Pakistan‘s manager and chief selector Moin Khan has shot back at his critics insisting senior batsman Younis Khan was dropped from the one-day squad only for the Australia series and that he was always in reckoning for the Test rubber.

“I just want to make it clear once and for all we sidelined Younis for the one-day series because we thought his form was not good enough for this format. But it is wrong to say we had ignored him completely in our plans,” Moin said from Abu Dhabi.

“Younis always featured in our plans for the Test series and with his performances he has proved what a senior player can achieve,” the former captain added.

A lot of controversy was generated in Pakistan cricket circles after the selection committee sidelined Younis for the one-day series against Australia. Younis himself lashed out at the selectors for now showing him respect and questioned the decision while pointing out he had only played one ODI in the last 18 months. But Moin insisted the selectors had no personal agenda with Younis.

“He is our foremost batsman and we always had him in mind for the Test matches – a format he has excelled in. We are all very happy that he has responded by scoring three hundreds in the two Tests. It has lifted the team,” Moin said.

The former captain has also come in for criticism for holding dual roles. Critics have pointed out that holding two key positions could lead to a conflict of responsibilities. But Moin said that he had never asked for two posts.

“I never asked for them the PCB gave them to me. And I think I have given my 100 percent with all honesty to them.”

“And if a person can do justice to two jobs which I am doing than I would be willing to even accept four different roles in Pakistan cricket,” he stated.

Moin said that the selectors had the dual task of not only preparing a strong side for the World Cup but also focussing on doing well in the current series against Australia and New Zealand.

“The Test series win over Australia is the result of team spirit and great contributions from everyone especially the seniors. Without Saeed Ajmal we were facing a tough time in Tests but I am relieved that our inexperienced bowling attack delivered so well. 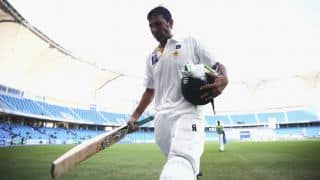