Younis Khan wishes to play on for Pakistan

Younis Khan wishes to play on for Pakistan

Younis Khan, at 39, in the autumn of a trail-blazing 17-year playing career, reached another milestone with his first century in Australia in the current third Sydney match, making a Test hundred in 11 countries.

Pakistan great Younis Khan says he wants to carry on playing Test cricket for his country as he nears the summit of 10,000 Test runs. Younis, at 39, in the autumn of a trail-blazing 17-year playing career, reached another milestone with his first century in Australia in the current third Sydney match, making a Test hundred in 11 countries. But Younis, who is just 36 runs away from becoming the first Pakistani batsman to score 10,000 Test runs, said he wants to bat on for Pakistan if “they want me. It all depends on my team and what they want. That s the main thing for me,” Younis told reporters after scoring an unbeaten 175 for his 34th Test century at the Sydney Cricket Ground. “It s not about that I m near 10,000 runs which will be a big achievement as a Pakistani.

“If you see that list there is no Pakistani who has achieved 10,000 runs so it all depends on my team and depend on PCB (Pakistan Cricket Board) and how they want me. Younis refused to be called Pakistan’s greatest batsman, despite the weight of statistical evidence of his run scoring. “I can t feel that I ll be the greatest Pakistani (player),” he said. “On that list you see Javed Miandad is there, Zaheer Abbas is there. There are a lot of great players there. Inzamam (ul-Haq) is also there.”I don t feel I will be the greatest batsman ever for Pakistan. “But I want people and my critics and followers to know that whenever I play, I play for my country and play for my team. That is more important for me.”

Younis said he was a “happy man” that he was able to break through for his first century in Australia with his 334-ball batting epic with 17 fours and three sixes. “At least I have made a hundred in Australia because the previous time I was out for 87 in the the 2004 Boxing Day Test (Melbourne). Younis began the Australia series sluggishly with just a half-century in his first four innings before he carried Pakistan’s first innings in Sydney. He said he had not done anything special to fight his way back into form. “If anyone criticises me, I take that very positively and I respond through my performances,” he said.

“At the same time I feel under a little bit of pressure as well but I make myself calm and cool and this has worked for me. Younis will be a key batsman as Pakistan attempt to salvage the final Test, trailing by 409 runs with nine second innings remaining on Saturday’s final day. 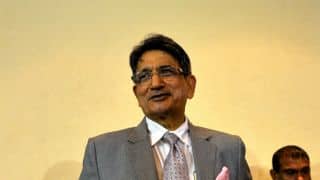