In pursuit of 300, Pakistan started the innings on a bad note.

Younis Khan fighting knock of 103 and Shahid Afridi‘s 25 ball 49 for Pakistan went in vain as New Zealand won the fourth One-Day International (ODI) by a narrow margin of seven runs to draw level the five-match series 2-2 with still one more match to go.

In pursuit of 300, Pakistan started the innings on a bad note as they lost opener Ahmed Shehzad for a duck in the very first over. Younis Khan joined Naser Jamshed in the middle. Both the players had a cautious approach as Pakistan got to their 50 in the 13th over. Younis was given an early life when he was dropped by Ross Taylor in the slips.

Pakistan, however, lost Jamshed for 30 soon after that. Mohammad Hafeez then walked in to join Younis but soon perished after adding just three runs on the board. It quickly became 59 for three in the 16th over and the Kiwi bowlers were right on top at this point. Since than Younis started the fightback from one end. Umar Akmal and Afridi gave him goo company. In the process the Pakistan number three Younis brought up his seventh ODI hundred. When he and Afridi were batting, it seemed Pakistan would finish the game with one to spare. But some bad running between the wickets by Pakistani batsmen and some good death bowling by Kiwi bowlers sealed the match for the visitors.

Meanwhile Williamson bowled a few off-spinners, first time after being cleared by the International Cricket Council (ICC). Daniel Vettori got his second of the match as he dismissed Harris Sohail for 13. Sohail was going for quick runs and he lobbed one in the air and was safely caught by Tom Latham.  After his departure, Umar Akmal and Younis put on a partnership worth 90. This partnership gave Pakistan a tiny ray of hope, but the required run rate was nearing 10 at this moment. Akmal was unfortunately run-out at the bowler’s end, which brought Captain Shahid Afridi to the crease.

Afridi started the onslaught as soon as he arrived. He deposited the ball to all corners of the ground, while Younis at the other end was nearing his seventh century. The pair brought up their 50 partnership in 31 balls with Afridi in full swing. At this stage, both teams were level, it was anybody’s game. After a few more explosive shots Afridi was caught behind for 49, at a strike-rate of close to 200. The next man, Sarfaraz Ahmed got into the act very quickly, striking a boundary in the second ball he faced, but unfortunately his team could not finish the job.

Earlier Kane Williamson won an important toss and decided to bat first. The Kiwis got off to a steady start with the openers Martin Guptill and Dean Brownline putting up a 81-run stand for the first wicket before Afridi dismissed Brownline for 42. Guptill however went on to get his 19th fifty before he was dismissed by Sohail Tanvir for 58.

Ross Taylor and skipper Williamson built a good third wicket partnership by playing cautiously. But it was cut short by Mohammad Irfan when Taylor was in pursuit for quick runs. Cory Anderson joined Williamson out in the middle, with the latter going at around run-a-ball.  Anderson dispatched his first six in the 41st over of the bowling of Harris Sohail, making his intentions clear. Williamson was holding fort at one end as he was closing in on his fourth ODI century. He eventually got there of 92 balls in the 48th over and helped his team to put up fighting score of 299.

The Pakistan bowlers found it very hard to get wickets at regular intervals. Irfan however managed to get two wickets including the wicket of Williamson of the last ball of the innings. Afridi was the most economical bowler. The leg-spinner had figures of 1-46 in his ten overs.

Man of the match: Kane Williamson 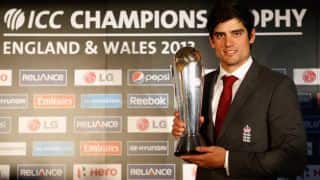